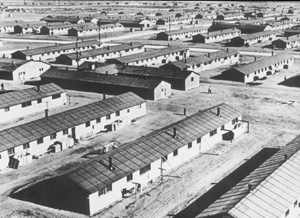 On February 19, 1942, President Franklin D. Roosevelt issued Executive Order 9066 authorizing the removal of more than 110,000 Americans of Japanese ancestry from their homes on the West Coast of the United States. Under the auspices of the War Relocation Authority (WRA), the federal government eventually imprisoned these Japanese Americans, twothirds of whom were native-born citizens, in ten internment camps—Manzanar and Tule Lake in California, Jerome and Rohwer in Arkansas, Colorado River (Poston) and Gila River in Arizona, Central Utah (Topaz) in Utah, Heart Mountain in Wyoming, Minidoka in Idaho, and Amache (Granada) in Colorado.

Camp Amache, located in southeastern Colorado, had been under construction for only two months when the first 212 prisoners arrived from California on August 27, 1942. Although only a portion of the camp was habitable, the Western Defense Command refused to alter its schedule of removals. By the end of September nearly 5,000 people were in camp, and within six months the population of Amache exceeded 7,500. Camp Amache virtually overnight had become the tenth-largest city in the state. But it was a peculiar city. Hastily built, enclosed by barbed wire, and still unfinished when the bulk of the evacuees arrived, it had only the most rudimentary facilities. Even with the internees themselves assisting the wra in various construction projects during these early months, mess halls were inadequate, bathhouses were without water, toilets were unsightly and unsanitary, and drinking water had to be trucked in from the nearby town of Granada.

In spite of the treatment they were accorded, or perhaps because of it, the men and women of Amache proceeded quickly to set up a system of democratic self-government. The camp charter, which had been drafted by early November 1942, was prefaced with a preamble that began with the words "We the People of Granada Relocation Center" and continued self-consciously to echo phrases contained in the preamble to the Constitution of the United States. As specified in the charter, a popularly elected community council, consisting of one representative from each of the twenty-nine blocks into which Amache's 348 barracks were organized, formed the core of camp government. It was responsible for establishing local ordinances, appointing an eight-member judicial commission to preside over all cases except felonies, and naming a fifteen-member arbitration commission to settle civil disputes.

Within a year after the charter had received the approval of the WRA, life in Amache assumed a semblance of normality: a police force of sixty men and a fire department of twenty-four to thirty men, assisted by a corps of voluntary firemen, were fully operational; the camp post office handled 2,500 letters and 400 packages daily; the Granada Pioneer spread the news to approximately 3,000 readers on a biweekly basis; a 150-bed hospital, staffed by five internee doctors and twentyfive nurses or nurse's aides, in conjunction with an outpatient clinic, treated 800 patients a week; a dental clinic with seven internee dentists dealt with 125 emergency cases daily; the local public library accumulated a collection of more than 4,500 books; and the education system enrolled 1,900 students in various grade levels ranging from preschool to senior high school. Because a workforce of nearly 3,500 internees formed the backbone of all of these enterprises, wra officials, with apparently little sense of the irony of the situation, were quick to announce that the program of "rehabilitating" the evacuees was progressing smoothly and that therefore the majority of those interned would soon be qualified to enter the "mainstream of normal American life."

What perhaps impressed wra authorities most were the successes of the camp farm and cooperative. The farm, which was the largest employer at Amache, encompassed some 10,000 acres, two-thirds of which were under irrigation at any given time. Contrary to the predictions of many local growers, the Amache farmers raised bumper crops of alfalfa, corn, and sorghum which, when coupled with harvests of head-lettuce, celery, spinach, onions, and lima beans, enabled them to export railroad carloads of produce to points outside Colorado. In 1943 alone, the total value of crops grown at Amache was $190,000. The cooperative begun in January 1943, the Amache Consumers' Enterprises, Inc., was similarly successful. With a membership in excess of 2,300 internees, the co-op brought into camp everyday items and services available to Americans on the outside. In its first year of operation, the co-op grossed more than $362,000 and became one of the largest organizations in the state.

But life at Amache in 1943 was not entirely reassuring to wra officials. In February the wra and the War Department jointly began to register all adults in the ten internment camps in the United States. As part of the registration procedure, internees were required to complete a questionnaire whose primary purpose was to measure "loyalty." Question 27 asked the internees whether they were willing to serve in the armed forces, and question 28 asked them whether they were willing to forswear any form of allegiance to the emperor of Japan. Based on the answers respondents gave to these two loaded questions, WRA officials segregated "loyals" from "disloyals." At Amache, the result was the removal of a small group of "disloyals" to Tule Lake, California, and the arrival of the first group of "loyals" from Tule Lake in September 1943. Eventually, more than 1,000 Tule Lake internees were relocated to Amache. James G. Lindley, the director of Camp Amache, was not pleased with the exchange. Loyalty aside, the "Tuleans," Lindley said, were troublemakers who resented internment and were unwilling to forget the "wrongs" they had suffered.

To Lindley's dismay, the Tule Lake contingent soon dominated the community council and voiced challenges not only to his policies but also to those of the federal government. Most notably, some of the former Tule Lake internees questioned the federal government's policy of drafting nisei men into military service while holding them and their families prisoners. Despite such protest, 494 men from Amache served in the military of a nation that classified them as "undesirable aliens." Thirtyeight of them earned combat decorations for exemplary conduct under fire; thirty-one were killed in action.

The courage and sacrifices of these men and the other Japanese American soldiers of the 442nd Regimental Combat Team and 100th Infantry Battalion accelerated the pace of the federal government's program to close the nation's internment camps. However, in late 1944 there were still more than 6,100 internees at Amache. In January 1945 the government lifted its ban on resettlement on the West Coast, and in March the wra announced that it was no longer necessary for internees to secure prior approval of their relocation plans. By this time, those remaining at Amache were apprehensive about leaving camp, fearful of what awaited them on the outside. The Denver Post had only recently referred to them as "Japanese enemies," local farmers now complained about them possessing the best farmland in the state, the Colorado House of Representatives passed a bill (defeated in the Senate) banning ethnic Japanese from owning land in the state, and local merchants in nearby towns still posted "No Japs Allowed" signs in their windows. Not until October 15, 1945, two months after the end of the war in the Pacific, did the last internees leave Amache. "What does America mean to you?" Marion Konishi, valedictorian of Amache High School, asked her classmates in 1943. It is a question that should resonate with us all.