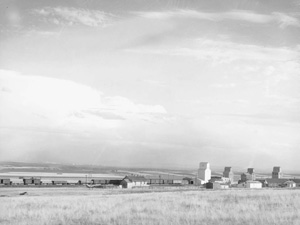 Marion Post Wolcott is best known for the social documentary photographs she made for the Farm Security Administration (FSA) during the later part of the Depression, including work in the Great Plains. She was born Marion Post in 1910 in Montclair, New Jersey. Her older sister Helen was considered the more artistic and was encouraged toward a career in the arts, becoming well known for her portraits of Native Americans done for the Department of the Interior in the 1930s and 1940s. Marion was sent to a series of boarding schools and eventually attended the New School for Social Research and New York University, intending to teach. On a visit to Vienna in 1933 she was introduced to photography and was strongly attracted to its immediacy and power.

After she returned to the United States Marion held a series of jobs until she was hired by the FSA to photograph farm problems and general rural life in America. She worked for the agency from July 1938 until November 1941, traveling thousands of miles through the South, New England, and the West. On June 6, 1941, she married Lee Wolcott, an administrator for the Department of Agriculture, and, at his insistence, her credits were changed on all her photographs to retroactively reflect her married name.

In the fall of 1941 she set out on her last major photographic expedition for the fsa, covering Colorado, Nebraska, Montana, Idaho, and, briefly, California. Although she was unfamiliar with the region, her Plains work is some of her best, emphasizing the openness of the land and the relative insignificance of the human impact upon it. She succeeded in capturing the sense of space and distance by using roads, telephone poles, long trains, and grain elevators as compositional devices.

Wolcott retired from professional photography in 1941, raised a family of four children, was recognized late in life as a significant contributor to American photography, and died in 1990.