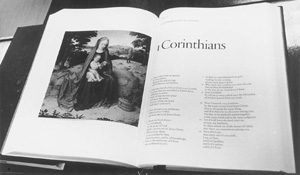 Bradbury Thompson, the eminent American graphic designer, was born in Topeka, Kansas, on March 25, 1911. In 1934 he graduated from Washburn College, where he served as the graphic designer and editor of the college publication. His major was in economics, but his editorial design work presaged his brilliant career in visual communications design. He also developed his visual discipline during these years by working as a draftsman for roads and bridges.

From 1938 to 1962 Thompson designed Westvaco Inspirations for Printers, the innovative arts journal of the West Virginia Pulp and Paper Company (Westvaco). It was at this time that he developed his unique style of visual graphic design, which included the experimental use of four-color printing, typography, and photo reproduction. Westvaco provided him with unlimited paper stocks and advanced printing processes; however, the company's budget for illustration was nonexistent. Thompson creatively solved this problem by adapting engravings, photographs, and artwork from advertising agencies, museums, and magazines.

After World War II Thompson worked as a freelance designer in New York. He was art director of Mademoiselle magazine and design director of Art News from 1945 to 1972. He also designed the format of various publications, including the Smithsonian Magazine. Another accomplishment was his design of more than ninety U.S. postal stamps.

In 1979, drawing from the experience he had accumulated at Westvaco and in the magazine trade, Thompson completed the design of the Washburn College Bible in 1979. He used the flush-left, ragged-right style of modern typesetting, and the lines of text are broken into individual phrases according to speech cadences, making reading easier while also providing a clearer meaning. His significant contribution to this project was to follow historical typographic traditions while also advancing typographic standards and incorporating them into modern visual themes. Thompson died on November 1, 1995.