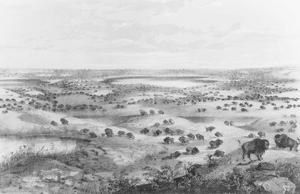 John Mix Stanley was one of a number of painters who came west in the first half of the eighteenth century to paint what they believed were the last days of the Native Americans. Born in Canandaigua, New York, on January 14, 1814, Stanley progressed from painting signs to painting portraits and landscapes. He was enamored with George Catlin's works and followed his example, retracing some of the same ground and even painting portraits of the same people.

Stanley traveled throughout Indian Territory from 1842 to 1845. In 1846 he accompanied American soldiers during the Mexican War, arriving in Santa Fe just weeks after Stephen Watts Kearny's Army of the West. Kearny hired him as a topographical draftsman, and Stanley fought in battle under Kearny in San Diego. Probably the most traveled of western artists, Stanley soon made his way to Oregon, where he narrowly avoided being killed in the Whitman massacre. He spent one year in Hawaii before returning to New York in 1850. There he began the first of several unsuccessful attempts to sell Congress his "Indian Gallery," approximately 150 paintings done in Indian Territory and the Southwest. Unable to sell his paintings to the government, he accepted an offer by the Smithsonian Institution to house his works. In 1853 he joined the northern railroad survey headed by Isaac Stevens, producing sixty images that were printed in the official reports of the expedition, several of which are of Great Plains scenes.

His western travel behind him, Stanley moved to Washington DC, where he further labored to sell his paintings to Congress. Stanley never again traveled among the Native Americans, but he continued to paint them, based on memory and imagination. Like Catlin, Stanley believed that the Native Americans were incompatible with American civilization and would fade away, a process he believed inevitable and ultimately just.

Exhibiting great realism, in part because he was one of the first artists to base his work on photographs, which he began using in the late 1840s, Stanley's works show greater skill than those of Catlin. The Trial of Red Jacket (1868) is his best-known work. Stanley's "Indian Gallery" was lost in the great Smithsonian Institution fire of January 1865, and a second fire that year at the New York City museum of P. T. Barnum, followed by an 1872 fire in his own studio, destroyed most of his remaining works. Stanley died of heart failure in Detroit, Michigan, on April 10, 1872, still hoping for compensation for his destroyed work. His remaining works are housed in the Smithsonian Institution; the Gilcrease Museum in Tulsa, Oklahoma; the Detroit Institute of Arts; the Stark Museum of Art in Orange, Texas; and the Buffalo Historical Society.

Dippie, Brian W. Catlin and His Contemporaries: The Politics of Patronage. Lincoln: University of Nebraska Press, 1990.