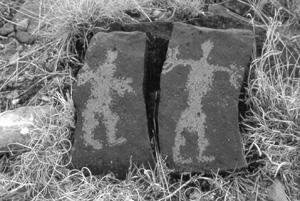 Rock art in the Great Plains consists of both petroglyphs (markings that have been pecked, scratched, incised, or abraded on natural rock surfaces) and pictographs (painting on nonportable rock surfaces). Petroforms (sometimes called geomorphs, in which large stones or boulders have been used to outline anthropomorphic, zoomorphic, or geometric forms) are found primarily in the northeastern U.S. Plains and southern Saskatchewan. Petroglyphs and/or pictographs have been recorded in all states of the Great Plains. Rock art was noted in the journals of European American explorers, but it was not until the 1930s that petroglyphs and pictographs were thoroughly documented and interpreted for professional publication.

The placement of petroglyphs and pictographs is highly variable in the Great Plains. In the Northern Plains rock art is found in and around major geologic uplifts, especially where rock surfaces are exposed on canyon walls and in rock shelters. On the open Plains rock art is found on sandstone or limestone where streams have cut the underlying bedrock and on boulders on talus slopes and hogbacks. Petroglyphs on isolated boulders also occur along the Missouri River in the Dakotas, in southern Alberta and Saskatchewan, and in central Texas and southern Oklahoma. Rock art in the Central Plains is rarer; however, proto-historic and early historic Native Americans used rock shelters intensively in the Dakota sandstone of the Smoky Hills region of northcentral Kansas, where they depicted representational images. Native Americans also made petroglyphs on sandstone bluffs in central Oklahoma. In the Northern Plains some rock art is believed to be associated with bison jumps and kill sites. It is generally acknowledged, however, that in prehistoric social environments the role of rock art as a means of communication varied with its social context. The places where it was produced are usually understood to have had special meanings and functioned, along with myths and stories, to maintain social cohesion.

Despite difficulties in the accurate dating of rock art, it is known that some of the oldest rock art in the Plains is found in the Black Hills of western South Dakota, eastern Wyoming, and the Wyoming Basin. These areas have rock art thought to predate 10,000 B.P. and also contain sites ranging through the Archaic period (7500.2000 B.P.). The art is primarily on exposed vertical cliffs and at the base of canyon walls. Zoomorphic figures, usually wapiti (elk) or mountain sheep, are the predominant representations. Some depictions of hunting are found, such as game nets or corrals and the spearing of animals by humans. Some of the most heavily varnished petroglyphs depict apparent hoof prints, vulvas, and grooves. Pictographs depicting orange to light red finger lines and handprints in central Montana are believed to be more than 3,000 years old.

Archaic hunters and gatherers in southern Texas, where the Pecos River, Devils River, and Rio Grande meet, created rock art—considered to be some of the most impressive prehistoric art in the world—in dry rock shelters. Dramatic polychrome pictographs of detailed life-size human-feline composites and anthropomorphic figures with feathers, wings, claws, horns, and weapons are documented. The oldest rock art, the Pecos River style, is nearly 4,000 years old. Farther north along the Pecos River at Lewis Canyon are more than 250 pictograph sites and more than 900 petroglyphs. The petroglyphs, many on flat rock surfaces, consist of abstract geometrical designs and representational figures of human hands as well as deer, bison, and bird feet. Depictions of atlatls, a weapon of the Archaic, suggest, in association with other cultural remains, production of the petroglyphs between 9,000 and 1,000 years ago. In some of the older glyphs human figures appear to brandish some kind of lance or other weapon. Rock shelters in the Wichita Mountains of Oklahoma contain near life-size anthropomorphic figures and geometric petroglyphs painted with red and yellow ochre.

Pictograph images of animals and anthropomorphs on a massive schist formation at Long Lake along the Manigotagan River in southern Manitoba are thought to have been produced during the middle to late Archaic. In the Milk River valley of southern Alberta a complex of 93 sites and 280 separate rock art panels constitutes one of the largest concentrations of rock art in the Northern Plains. This area, the Writing-on-Stone Provincial Park, includes petroglyphs ranging from up to 1000 years old through the postcontact period (A.D. 1725–1850). Boulder alignments, many considered solstice-aligned configurations, are found in southern Saskatchewan. Some of the alignments were probably constructed 2,000 years ago; others, based on astronomical calculations, may have been constructed in the eighteenth and nineteenth centuries.

Rock art in southeastern Colorado, including many zoomorphic or anthropomorphic representations, has been intensively studied, especially in the rock shelters of the Purgatoire River area. Some rock art in this area is associated with rock structural remains that suggest Native American vision quest activities. Ages of these images range from the middle Archaic (c. 3500 B.P.) to the late Ceramic stage (c. 250 B.P.). A cluster of dry caves and rock shelters in the canyon country of Black Mesa in the Oklahoma Panhandle contain petroglyphs and pictographs of bison and anthropomorphs, associated with perishable artifacts such as sandals, basketry, and skin bags, that range in age from the late Archaic through the Woodland (A.D. 200–1000). The Black Hills of South Dakota include many examples of prehistoric rock art. Stylistic analyses suggest that a chronological sequence of rock art, ranging from the late Paleo-Indian to the early historic period, is reflected in at least seven distinct styles of petroglyph and pictograph imaging. Pecked petroglyphs are also documented, especially in Whoop-Up Canyon in the Black Hills.

The diversity of prehistoric rock art in the Great Plains is indicative of the region's varied modes of social organization and economic systems. Advances in the technology of direct dating will help in assigning rock art to its cultural a.liations, but an understanding of why the markings were made in the places they occur will challenge researchers for years to come and, indeed, may never be known.