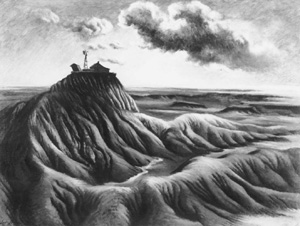 Although not well known today, Joe Jones rose to national prominence as an artist during the Great Depression in the United States. Born in St. Louis on April 7, 1909, this grandson of a stonemason and son of a house painter used his humble beginnings and political beliefs to fashion a persona as a working-class hero that befitted the times. In the early 1930s the twenty-year-old was working alongside his father painting houses when he began to draw attention in local art circles for his works on canvas, produced without the benefit of formal training. But his middle-class backers began to retreat as the young artist became as notorious for his controversial political activities as he was for his paintings. Jones's flight to New York to escape local prosecution on a charge of spreading Communist propaganda proved to be a wise career move.

His first one-man show in the spring of 1935 at the American Contemporary Art Gallery received rave reviews. His social protest paintings such as We Demand, which depicts a workers' demonstration, and American Justice, which features a lynching, garnered the most attention. However, his next exhibition, Paintings of Wheatfields, at the Walker Gallery in January 1936, showed him moving in a less controversial direction. These tranquil scenes of farmers at work in their fields brought the self-proclaimed "professor of wheat" five prestigious federal contracts for murals in post offices in the Midwest and the Great Plains, commissioned by the Treasury Section of the Fine Arts, a New Deal program that sought to bring art to the public while employing struggling artists.

While he was in the Plains Jones painted the oil on canvas works Turning a Corner (1939) in Anthony, Kansas, and Men and Wheat (1940) in Seneca, Kansas. Deftly balancing the restraints of the administration's guidelines, the local postmaster's needs, and the awkward constraints of the site, Jones produced typical regionalist rural scenes, depicting man, machine, and landscape working together in harmony. But beyond the mythic ideal of a bountiful nature, Jones's compositions frankly reveal humanity's mark upon the environment–the lush fields are being thoroughly stripped by the anonymous workers, their figures merging with the dominating forms of modern machinery. The artist expressed his desire to portray both the importance of wheat to Kansas and the image of people at work in the murals. But as social realism fell out of fashion in the 1940s, Jones abandoned the working hero, focusing instead on the portrayal of the landscape for corporate clients such as Fortune magazine and Standard Oil. He died of a heart attack in New Jersey on April 9, 1963.