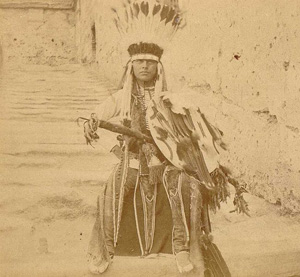 Active in the Southern Plains wars, then incarcerated at Fort Marion in St. Augustine, Florida, between 1875 and 1878, Howling Wolf was a Southern Cheyenne warrior and noted artist who was born in 1849. He and his father, Eagle Head, were undoubtedly at the Sand Creek Massacre in 1864, and Howling Wolf subsequently engaged in various battles, successfully counting coup or completing his first culturally recognized brave action on a war party led by the Bowstring warrior Lame Bull in May 1867. Howling Wolf became a secondary Bowstring leader before being selected, together with seventy-one other Southern Plains warriors and chiefs, for exile to Fort Marion, Florida.

Arguably the single most important Plains artist who worked on paper during the late nineteenth century, Howling Wolf is the only artist known to have created drawings during the prereservation era, on the reservation, and at Fort Marion. Using available paper, often lined accountants' ledgers, Plains men drew images of their battles and horse raids in much the same manner they did on hide robes. Howling Wolf 's drawings from the first half of the 1870s not only reflect Plains systems of representation, with emphasis on the identity of protagonists and important actions, but also demonstrate experimental creativity and great skill. At Fort Marion he, like many of the younger prisoners, made drawings for various reasons, including to sell to tourists. His Florida drawings are generally nostalgic views of home or records of the men's new experiences rather than battle images. The few drawings he made following his release in mid-1878 demonstrate additional changes in subject and style that may be attributed to the vastly different life of the reservation and to many of the unique experiences he had in the East. Howling Wolf died in Oklahoma on July 5, 1927.