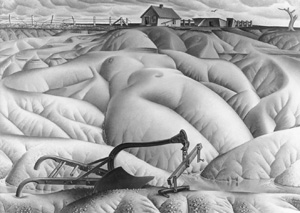 American artist Alexandre Hogue is known primarily for his paintings of the Dust Bowl of the 1930s. Hogue was one of the few painters of the period to acknowledge the conditions of the Southern Plains during the Great Depression, and his works are considered both accurate and provocative. His concern with the environment and with humans' relations with it endures as a major theme in his work.

Born in Memphis, Missouri, on February 22, 1898, Hogue grew up in Denton and Dallas. He worked briefly (1921-25) in New York as a graphic designer and then returned to Texas, where he established himself as an artist, teacher, and writer. His explorations of the landscape along with his interest in Native cultures and their attitudes toward nature formed an artistic credo that emphasized not only the beauty of the land but also the effects upon it of human activities.

In his travels through the region he witnessed the development of the Dust Bowl, and in 1932 he began his series on the ecological disaster unfolding before him. Dust Bowl (1933, Smithsonian Museum of American Art), Drouth Stricken Area (1934, Dallas Museum of Fine Art), and Drouth Survivors (1936, destroyed in 1948, formerly in the Musée National d'Art Modern, Paris) all show a landscape described by Hogue as a "lush grassland" transformed into a desertlike place scarcely able to sustain life of any kind. Tractors and dead cattle half-buried in sand dunes, an abandoned farm with its broken windmill and dust-filled water trough, and the eerie light of a dust-choked, sandy, and barren ranch–all these images created an apocalyptic iconography that Hogue used to convey the reality of the situation on the Plains as well as his condemnation of the farming and ranching practices that had created it. Unlike the photographers of the Farm Security Administration, who also documented Depression Era conditions, Hogue expressed little sympathy for the families forced off the land by the Dust Bowl (in fact, they do not appear in his work) but instead made it clear that he held humans accountable for their deliberate misuse of the land.

Perhaps the grimmest and most accusatory painting is Mother Earth Laid Bare (1938, Philbrook Museum of Art Museum, Tulsa), in which overproduction of the land and disregard for the forces of nature are clearly presented as acts of desecration. In contrast to other painters of the period such as Grant Wood and Thomas Hart Benton, who generally treated their region as a place of hope, good values, and productivity, Hogue presents a sobering view of a land exhausted and ruined by the failure to acknowledge and respect nature. Later works from the 1950s on were less condemnatory but continued to express the artist's reverence for nature, even at times in an abstract style. His series of drawings, pastels, and paintings on the Big Bend landscape (c. 1960–c. 1990) especially demonstrate the persistence of this theme.

In addition to his career as an artist, Hogue was an important teacher in the region, notably as head of the art department at the University of Tulsa (1945–68). During the 1930s he was a leader in one of the most active regional groups, known as the Dallas Nine, and was also a founder (1938) of the Lone Star Printmakers. Hogue died in Tulsa on July 22, 1994.