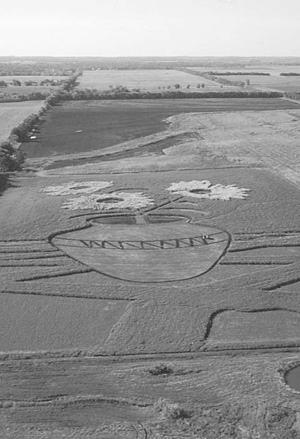 Since the late 1970s Stan Herd has created monumental portraits and other images by plowing, planting, and mowing on tracts of farmland in the Great Plains.

Born in 1950 in Protection, Kansas, and raised in an area that was formerly Kiowa hunting grounds, Herd has frequently chosen his subjects and perfected his methods to reflect his admiration for Native American spiritual attitudes toward the land as well as his concern for contemporary environmental issues. As a youth Herd was struck by images of the colossal pre-Columbian drawings on the desert floor of the Andes Mountains and later by his aerial view from a small plane of a farmer turning over the rich Kansas earth. Herd's first project, completed in 1979, was a portrait of the Kiowa chief Satanta, whose heroic exploits had made him a symbol among the Kiowa of resistance to European American encroachment. Herd began by gridding off a pencil sketch from a photograph of Satanta and transferring this scheme to the land by means of numbered flags. The artist then followed these guides on tractor, pulling a brace of disc rotors behind him to etch the final image into the soil. Herd soon discovered the challenge posed to his image by the vagaries of weather and unpredicted wild plant growth and in the course of ensuing projects would learn ways to gain more control over the ecology of his earth art. This included abandoning for the most part his "subtractive" plowing method in favor of images produced through the strategic plantings of crops, as, for example, his Sunflower Field of 1985-87.

Herd's special concern for the struggles of Native peoples to maintain their culture is exemplified in Little Girl in the Wind (1990), a portrait of a Kansan Kickapoo woman and the first of a planned Nation's Portrait series addressing the hardships of Indigenous women in their lands of origin. In a similar vein, Medicine Wheel (1992) was a cooperative venture with faculty members Dan Wildcat and Leslie Evans of Haskell Indian Nations University. Conceived as a Native American response to the quincentennial celebrations of Columbus's arrival in the New World, the wheel was dedicated with a Flame Spirit Run during which Native American leaders carried flames from the circle's center outward in the four compass directions. As intended, Medicine Wheel has since become a place of prayer and meditation for all peoples of the surrounding community.

One issue Herd has continually wrestled with is the relationship between art and the business world. In 1988 he created Cola Wars for the Ottawa, Kansas, Arts Council. First etching the outline of two crushed Coke and Pepsi cans in a field, Herd then gathered close to 1,000 volunteers wearing all red or blue clothing to temporarily fill in the images of the cans. The anticommercial intention of this living earth sculpture was to emphasize how advertising produces a throw-away consumer culture, resulting in a landscape blighted with trash. Nevertheless, in subsequent years Herd has come to accept the occasional necessity for corporate patronage, carefully screening for companies he deems socially responsible and that offer artistically challenging projects. In considering his first such venture, Absolut Vodka (1990), Herd was impressed with the activism in Iroquois Native American issues evinced by the CEO of Absolut's American distributing company.

Herd's recent projects include the whimsical Ancient Fish Maze, an image after the 80-million-year-old fossils of Xiphactinus found in Kansas. Cut from a dormant alfalfa field outside Lawrence, the contours of the prehistoric fish are filled in with a complex maze design. A portrait of Amelia Earhart, commissioned by the aviator's hometown of Atchison, Kansas, to celebrate the 100th anniversary of her birth, is taking shape from native stone and perennial grasses and will be the artist's first truly permanent land work. As with many of Herd's projects, numerous assisting volunteers make the Earhart portrait a community-wide effort.

Kinsey, Joni L. Plain Pictures: Images of the American Prairie. Washington DC: Published for the University of Iowa Museum of Art by the Smithsonian Institution Press, 1996.