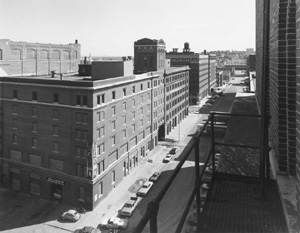 In the last half of the nineteenth century, as settlement moved westward, an intriguing building type called the warehouse, or jobbers, district developed in "gateway cities" in the Great Plains. These districts marked the establishment of an urban presence in the Great Plains. Where they remain today, they are among the strongest and richest of central business neighborhoods.

At their peak in the 1860s, there were over sixty such districts in the Great Plains and Midwest. This number had declined to twenty by 1930, and today only a handful remain with their original integrity intact. Plains cities notable for the development of these districts include, from north to south, Winnipeg, Manitoba; Sioux City, Iowa; Omaha and Lincoln, Nebraska; and St. Joseph and Kansas City, Missouri.

A number of factors in the transport of goods and services came together to create the need for and configuration of these districts. Where there was a break in a method of transport (e.g., from cart to water or water to horse), a settlement usually occurred. When there was a break in the ownership of the goods transported, a commercial area developed. Thus in the Great Plains a number of gateway cities developed where these changes in transport and ownership occurred.

Farming and settlement development in the Great Plains created a large demand for goods. Originally, these were stockpiled in East Coast warehouses and shipped via wagon and river to various western settlements and outposts. With the development of the railroad and the telegraph in the 1850s and 1860s, it was possible to do the "jobbing" of goods from the Midwest rather than from East Coast locations. Merchants communicated their orders by wire. The goods could then be shipped e.- ciently by rail to gateway points, where they were stored for sale and then transshipped to smaller wholesalers and retailers scattered throughout the region. This situation created a demand for large storage buildings and was the economic force that produced a warehouse district. This commercial engine roared from the 1850s to the crash of 1893, then revived around 1900 and continued through the 1920s. Then, because of trucking and transportation changes, the need for large jobbing areas and their distinctive buildings slowly disappeared.

The architectural style of the warehouse buildings varied from austere brick boxes that were relatively unadorned to rich examples of Renaissance Revival and Richardsonian Romanesque. A typical district, like Omaha's, was a mix of building styles. The architectural strength of these areas lay not so much in the individual buildings as in the collective character of the districts they formed. In general, they were laid out on a grid pattern, filling whole blocks from curb to curb and ranging up to eight or nine stories high. This height, combined with their street-level activity around office areas, loading docks, and traffic, created a strong urban character. In many cases, these buildings provided the most identifiable "city element" of their communities as well as the richest architecture.

The need for large floor areas and the strict functional requirements dictated some unique structural solutions. Also, encouraged in part by the tremendous amount of rebuilding required after the Chicago fire of 1871, many innovative engineering and construction solutions developed that spread throughout the Midwest and Great Plains. The Chicago architectural firms of Burnham and Root and Adler and Sullivan were early leaders in these engineering and architectural advancements.

The structure of a typical warehouse included exterior brick bearing walls with heavy timber columns and joists with wood flooring. Heavy timber, with large cross sections of wood, proved to be more fire resistant than cast iron, which would warp and sag at temperatures at which wood was still noncombustible. Toward the end of the warehouse era a new structural system developed in reinforced concrete. Pioneered by Deere and Company of Moline, Illinois, and their in-house architect, Oscar Eckerman, this system consisted of brick bearing walls with reinforced columns and flat concrete slabs. The flat-slab technology eliminated the height requirement of beams and joists and developed the most efficient floor areas for high-volume storage. This system was also virtually fireproof, and, concurrently, many innovative fire safety details were developed, such as fireproof exit stairs and stand pipes for water distribution.

The functional requirements that produced the warehouse districts declined from the 1920s on. The districts slowly fell into disuse until the early 1970s, when they were rediscovered for a variety of retail, commercial, and housing activities. Today, warehouse districts are enjoying a rebirth, and where they remain they still represent some of the best architecture and urban character of Great Plains cities.