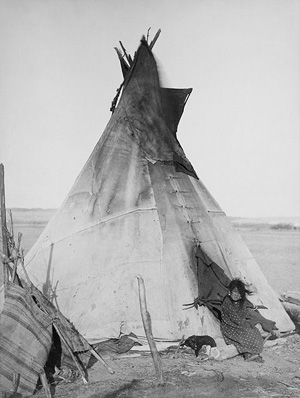 "A young Oglala girl sitting in front of a tipi, with a puppy beside her, probably on or near Pine Ridge Reservation, 1891." (John C. Graybill collection, Library of Congress)

Tipis are the conical skin- or canvas-covered dwellings used by the Plains Indians as permanent or seasonal dwellings. The Sioux word tipi literally translates as "used to live in." In the nineteenth century each tipi accommodated, on average, eight to ten adults and children. Minimally, tipis consist of a number of long, thin poles placed vertically to form a conical framework, a hide or canvas cover, and tent pegs, rocks, or sod used to hold the cover to the ground.

The framework of tipis consists of peeled poles trimmed of all knots and branches and thinned at the base. Tipis normally utilize fifteen to twenty-five poles, two to adjust the smoke flaps and the rest for the frame. The poles are tied together at the peak of the cone, but poles extend several feet beyond the point where they cross. Size is limited by available pole size. An eighteen- to twenty-footdiameter tipi uses sixteen to eighteen poles, each twenty-two to twenty-five feet long. Some tribes, particularly the Crows, preferred longer poles that extended higher above the cover. The poles were usually two to three inches in diameter where they crossed and three to six inches at their butts.

In many parts of the Northern Plains, lodgepole pine was the preferred tree for poles because it tends to grow tall and straight and requires less thinning at the base. Where lodgepole was not available, other conifers such as yellow pine, tamarack, and cedar were used, but these were normally heavier or required more trimming.

The tipi cover was made by piecing together hides or lengths of canvas. Buffalo hides were used until the second half of the nineteenth century, when they were gradually replaced by canvas. The hides were thinned, tanned, and cut to the desired shapes. The entire cover is a semicircle with a smoke flap on each side of the center point. The radius of the semicircle is close to the basal diameter of the finished tipi. A traditional tipi with a diameter of fifteen to sixteen feet required thirteen to sixteen buffalo hides. A modern tipi with a diameter of eighteen feet requires sixty-eight square yards of canvas.

Some tipi covers were painted. The painting was done before the tipi was erected. Designs included geometric shapes, sacred animals important to the designer, legends, and battle scenes. Women usually made, erected, dismantled, and maintained tipis, but men painted the designs, and the overall design was exclusive to the painter. The Kiowas of the Southern Plains and the Blackfeet of the Northern Plains were particularly renowned for their painted tipis.

Plains Indians set up tipis by first lashing three or four poles to form the frame. Most Siouan-speaking groups used a three-pole frame, whereas western Plains tribes such as the Crows and Blackfeet favored the four-pole frame. The remaining poles are placed on the frame, and the cover is stretched over the poles. The cover is laced together in the front of the tipi from the ground to the smoke flaps, leaving an opening for the doorway. The final step is to secure the bottom of the cover to the ground. Today, tipis are tied down with tent pegs. In the past, stones or sod blocks often secured the base of the cover. When the tipi was removed, the rocks were rolled off the cover and left as circular alignments, now called tipi rings. These provide the main archaeological evidence of early tipi use.

Tipis are not perfectly circular. The poles on the back are usually slightly closer to the center, creating a steeper surface. This produces a slightly tilted cone, with the steeper back side facing windward and a more gradual slope on the leeward side with the doorway. This arrangement improves stability in strong winds. The difference between the long and short axis is less than 10 percent, and the floor plan is slightly egg shaped.

Tipis are, surprisingly perhaps, quite heavy. The poles for an average tipi weigh around 400 pounds, and a hide cover adds another 100 to 150 pounds. When Plains Indians acquired the horse, they could travel ten to fifteen miles a day using the poles as a travois and putting portions of the cover on each travois. Before the horse, however, dogs were the only pack animals, and it was a strenuous job for a family to move 500 to 600 pounds of tipi poles and cover, plus another 100 pounds or more of bison robes, stored food, and personal possessions five or six miles a day.

Tipis have probably been used since the Middle Archaic period, about 4,000 years ago. Most archaeological evidence dates to the period 2,500 to 500 years ago. Tipi use increased steadily over time and was probably one of the major factors that enabled more intensive and specialized use of the open Plains. Virtually all tribes in the Great Plains from Texas to southern Canada used tipis. Eastern Plains groups who lived in earth-lodge villages used them seasonally when hunting; western Plains hunting and gathering groups used them as year-round dwellings.

Tipis were ideal, adaptable dwellings for the seminomadic Plains Indians. They could be taken down or erected in a few hours and moved to anywhere the group chose to set up camp. They could be adapted to accommodate the number of occupants. In inclement weather they could be modified to include liners and insulation, and, with an internal fire, they offered protection from strong winds and frigid temperatures.

Today, tipis are important symbols of ethnic and tribal identity. They symbolize adherence to traditional ways, evoking lifestyles that persisted for centuries but that have since been effaced. Nevertheless, tipi designs, the knowledge of how to erect tipis, and the right to paint them remain a prized part of the rich Plains Indian heritage.

Laubin, Reginald, and Gladys Laubin. The Indian Tipi: Its History, Construction, and Use. Norman: University of Oklahoma Press, 1977.