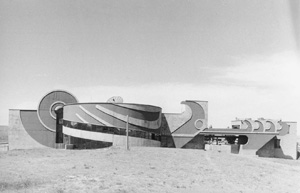 Before the 1960s and after the demise of traditional architecture, little attention was paid to cultural relevance when designing housing and other structures on Indian reservations. Assimilative pressures, financial exigencies, and supposed efficiency led to reservation housing that was built to resemble housing for other groups, however different the cultural contexts. The standardized buildings also ignored differences in natural environments. Reservation cultural centers and urban social service centers, if built at all, were usually vernacular structures with little indication of the culture in question.

In the late 1960s and early 1970s Native Americans and Canadian First Peoples began to consider ways in which their cultural expressions could help them overcome difficulties in their private and community lives. Language revival, religious renewal, and other recalled traditions were brought into service. Economic development grants made it possible to use the marketing of heritage to generate employment on reservations in need of jobs. Greater public awareness of past social injustices and a new emphasis on group identity rather than the "melting pot" ideology created a favorable background for efforts to make architecture, as the setting for life, more relevant to the traditions of Native American users. Not all Native American groups are creating specifically Native American modern architecture, but many are, and in increasing numbers.

Cultural relevance can be suggested quickly by adding ornament to a standard building, for example. It can be achieved more substantially by reproducing or paraphrasing building types such as earth lodges and brush shelters that predated the arrival of European American settlers. Architects may use traditional building materials and may align their structures with the movements of the stars and other natural forces. Douglas Cardinal, a Canadian Métis, designs curvilinear forms for both Indigenous and immigrant clients that remind observers of the massive contours of bison or eroded rocks. Some clients and architects prefer to use symbolic forms, incorporating numerological patterns or the shapes of animals or medicine wheels, hoping that the values inherent in the symbols can be transferred to the users. Still others incorporate traditional patterns of use into the building plans, adding ceremonial rooms, central gathering areas, and meditation chambers to schools and hospitals. They may take into account customary desires to observe events in groups, standing, instead of in fixed rows of seats. They may also accommodate Native peoples' reticence when meeting strangers or the need for storage of crafts and hunted food. Some buildings have been designed by communal processes rather than by standard European American professional practices.

Some tribes restrict culturally appropriate efforts to buildings erected for the direct benefit of all tribal members, including schools, clinics, tribal office buildings, cultural and religious structures, and urban social and service centers, while excluding casinos. Other tribes include windows, trees, and other plantings in casinos, suggesting links between Native Americans and nature and implying that a casino, the "new buffalo," benefits the tribe and is therefore respectable.

In the past decade the United States Department of Housing and Urban Development has become more sensitive to the need for inexpensive housing that also supports customary patterns of Native American life. Multigenerational families and issues of courtesy and privacy are now taken into account. The department has sponsored or encouraged construction with natural materials and with centralized and other unconventional plans inspired by preference polls of prospective residents. Not all tribes take advantage of the department's initiatives, and the available funds cannot meet the urgent need for lowincome reservation housing units and the repair of existing ones.

Museum buildings and tourist facilities are especially likely to embody aspects of Native American culture or tradition, because one major aim is to celebrate the distinctiveness of the historic cultures in question. Construction of tribal museums has been stimulated recently by the Native American Graves Protection and Repatriation Act of 1990, which provides for the return of artifacts and human remains to descendants of their original owners. There is no standard museum plan, so the sponsors can build innovative forms or reproduce older ones.

Ceremonial buildings, by contrast, must adhere to certain physical patterns lest the ritual action be hindered. Other religious buildings too, such as the Native American Church at Wounded Knee, South Dakota, are usually traditional in form, though not always in materials. Glass walls or steel beams, for instance, may be used to enlarge such buildings, to economize, or to improve safety.

One design problem is that many Plains people traditionally lived in portable and temporary structures that cannot easily be evoked by fixed buildings made of permanent materials. For this reason, Denby Deegan (Arikara- Sioux) and Dennis Sun Rhodes (Arapaho) have substituted symbolic forms such as the medicine wheel at Deegan's Four Winds School at the Fort Totten Reservation in North Dakota or Sun Rhodes's prairie-side facade (under Thomas Hodne's supervision) for the Piya Wiconi Building at Oglala Lakota College on the Pine Ridge Reservation in South Dakota. Peter Kommers used the morning star to generate a design for the Northern Cheyenne Heritage Center in Lame Deer, Montana. A design by Mark Hoistad for the Omaha interpretive center in Macy, Nebraska, includes totems evoking clan warriors and references to the cosmos reflected in a camp circle as well as a conical container for the sacred pole.

Problems connected to culturally appropriate design include locating sensitive architects (there are still few Native Americans in the profession), securing funds, making decisions by consensus, and devising forms that reflect the cultures. Not all tribal members understand the symbolism in proposed designs, but most will respond favorably to buildings that honor age-old customs and revere traditional patterns of life.