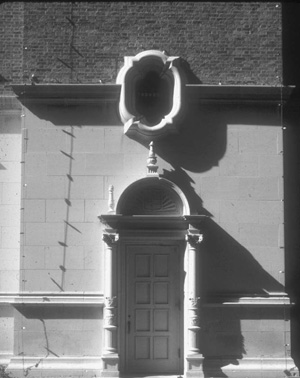 Herminghaus graduated in horticulture from the University of Nebraska in 1913 and from the landscape architecture program at the Harvard Graduate School of Design in 1915. An enthusiastic plant expert, Herminghaus taught landscape design and history in the University of Nebraska's architecture program during the early 1930s. During both world wars, Herminghaus worked on designs for military bases at Hastings, Nebraska, and Hanford, Washington, and in Alaska and England.

Because he learned design under Frederick Law Olmsted and Henry Vincent Hubbard at Harvard, Herminghaus's designs for Pioneers Park and private residences read like a Beauxarts pattern book for landscapes. Herminghaus used Pioneers Park's rolling topography to highlight a series of sequential views within and beyond the park. Distant views focused on the Nebraska State Capitol tower, and internal views terminated at large sculptures. The park's first 160 areas are exclusively devoted to a series of carefully linked, informally planted spaces. Tight spatial control in this rural park was created by dense plantings of conifers. Expression of his rich plant vocabulary resulted in a varied palette of deciduous trees and shrubs. Pioneers Park has been placed on the National Register of Historic Places.

Herminghaus's 1933 plan for the Nebraska State Capitol grounds reveals that he understood the visual needs of the building and landscape better than the architects. Elements of the plan include a broad lawn with carefully placed deciduous trees and a foundation planting of large evergreens. The lack of ornamental shrubs keeps the viewer focused upon the building's rich architectural detail. However, in the capitol's interior courtyards the full ornamental expression of Herminghaus's horticultural knowledge is seen in formal plantings of bright seasonal flowers and diverse shrub borders. Herminghaus's Nebraska State Capitol landscape plan was the state's largest planting project up to that time.

Herminghaus was more than a mere technician. He was also a teacher, and he inspired humanistic goals in his design work. After his death on September 20, 1965, in Newton, Connecticut, Ernst Herminghaus's ashes were scattered in Pioneers Park.