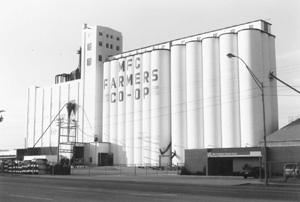 The grain elevator is a facility that stores dry, small cereal grains; it handles grain in bulk rather than in bags or sacks, and it stores, moves, and processes grain vertically. Vertical handling and storage are desirable because grain flows by gravity in tall, narrow bins, and thus less power and labor are needed. Grain elevators emerged in the second half of the nineteenth century in North America when agriculture shifted from a subsistence-based to a cash-market economy as wheat farmers of the Great Plains states and provinces began mass, long-distance distribution of their produce.

All grain elevators consist of several components. The workhouse contains the lower floors, while the headhouse (cupola) consists of two to five upper stories. The workhouse name is derived from the fact that much of the receiving and unloading operations take place on the work floor of the first story, where the elevating (lifting) process begins. The headhouse is so named because the head drive of the vertical conveyor system is located there. The workhouse and the headhouse are collectively referred to as the mainhouse.

The workhouse is the heart of the grain elevator. It contains a "boot" into which farmers dump their crop and a vertical belt-andbucket conveyor that lifts the grain from the boot to the headhouse, from which it is spouted to a series of walled bins for bulk storage. At the bottom of the bins are openings out of which the grain empties into chutes connected to waiting transportation such as trucks and railroad cars.

The first stage in grain elevator architecture was the vernacular iron-clad wood type. Constructed by local farmers and carpenters without a standardized plan or blueprint, the structures emphasized function over form. There are two subtypes based on framing. The studded type consists of balloon construction, also used in residential and commercial building. The cribbed type has walls of two-inchthick planks, ranging from four to ten inches wide depending upon the height of the elevator. These are laid flat, spiked through one another, and overlapped at the corners. Cladding of one-by-six-inch lapped boards is used for both subtypes. Distinctive features of the iron-clad wood elevator include tie-rods extending through internal bins that are anchored to horizontal braces on the exterior walls and the galvanized iron or tin cladding applied to the exterior walls. Cladding was used for weatherproofing as well as to protect the wood from sparks discharged from coalpowered locomotives passing nearby.

The design and scale of the iron-clad wood elevator include a rectangular-shaped workhouse, forty to sixty feet high and surmounted by a two- or three-story rectangular full or partial headhouse approximately fifteen to twenty feet high. Gable roofs are common for both workhouse and headhouse. Internal features include up to as many as twenty cribbed bins of various capacities for storing and blending the grain, the boot pit (the central dump that receives the grain), the wood elevator leg (the shaft that houses the beltand- bucket conveyor system), the distributor wheel that directs movement of grain to various bins, and the wood spouting system that channels grain to bins or load-out chutes. Depending upon the size of the structure, total storage capacity ranges from 10,000 to 50,000 bushels.

From the beginning of commercial agriculture in the Great Plains, the iron-clad wood elevator was the primary hub for the grain storage and shipping industry. Railroads often provided land (right-of-way) for its construction as well as grain cars suited for transporting locally produced grain to distant markets.

Because of the skyrocketing insurance rates for wood elevators, elevator owners and builders experimented with other materials, such as steel and clay tile. Concrete, however, became the material of choice by 1900 because it eliminated the twin dangers of weevils and fire and thus reduced insurance costs. Cylindrical-shaped concrete structures were an engineering innovation when introduced to the grain industry. The slip-form technology used in their construction produces a tank in one solid and continuous piece of concrete without joints and patches. The technique consists of a concentric double-ring form into which concrete is poured. As the concrete in the lower part of the ring sets, the forms are jacked upward, and more concrete is added. This process is continued until the desired height is reached. The walls, six to eight inches thick, are reinforced with vertical and horizontal steel rods (I beams).

Grain elevators can be classified into four types based on function. The first and most numerous is the country, or local, elevator sited along railroad tracks in the small towns of the Great Plains. Because of the large quantities of grain produced in the surrounding countryside, farmers need local storage facilities to handle surplus production before shipping to domestic or international markets. Country elevators allow local producers to hold their grain for a better price, protect it against waste and spoilage, accommodate large quantities of grain during a peak harvest season, and charge lower storage rates than terminal elevators.

The terminal elevator receives grain via rail or truck from the country elevators. These towering bins, up to 150 feet high and arranged in long, parallel lines, have the capacity to hold several million bushels of grain. After receipt of the grain from country elevators, terminal operators sell huge shipments to flour manufacturers or store the grain for later sale to domestic and foreign buyers.

A third type is the processing elevator. Rather than grain storage, its goal is to process the grain within or near the facility into a finished product and series of by-products for either human or livestock consumption. Processing elevators consist of two subtypes, the flour mill and the feed mill. The flour mill elevator classifies and blends wheat for milling and is designed to transfer wheat to a nearby flour mill, where the milling process is completed. The storage tank arrangement of a flour mill elevator is comprised of a variety of bin sizes to hold different grades of wheat used for producing different types of flour. The turning-over process is important in a flour mill elevator in order to retain wellconditioned wheat during prolonged periods of storage. Therefore, flour mill elevators require a complex network of vertical and horizontal conveyors to withdraw wheat from any bin and send it to another. Flour mill elevators also feature specialized equipment concerned with testing and cleaning raw grain such as laboratories, dampers, washers, and driers.

The feed mill elevator normally handles, in addition to wheat, a variety of grains, including corn, oats, and soybeans. Because of this, the feed mill elevator's internal storage must be arranged to provide bins of varying sizes to accommodate different types of grain. Feed mill elevators require different types of space, chutes, and auxiliary buildings such as load-out chutes and docks for both sacked and bulk feed, packing rooms, and warehouses for sacked-feed storage. Moreover, formula-feed mixing plants are connected to the elevator if this process is not completed within. Finally, feed mill elevators also contain specialized equipment, including corn shellers, cob crushers, roller mills, aspirators, sacking spouts, and batch mixers, which blend mineral supplements and other grains according to customer formulas.

There are two noticeable differences between grain elevators in the Canadian Prairie Provinces and those elsewhere in the Great Plains. First, wood elevators remain more numerous in the Canadian provinces, although this is expected to change as they are replaced by the concrete version. Second, the exterior of Canadian wood elevators is usually painted. Colors vary according to company ownership; however, red, silver, white, and brown are the most common.

Whether wood, tile, or concrete, the grain elevator continues to dominate the visual landscape of the Great Plains, where it has played a significant role in the economic life of small towns for more than 100 years.