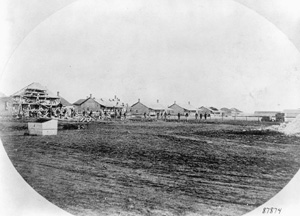 In the nineteenth century, army posts throughout the Great Plains region varied widely in appearance, reflecting the lack of a centralized design authority. Post commanders exercised great latitude in construction decisions, often relying on poorly trained lieutenants who designed buildings and oversaw their construction. Low levels of funding forced these officers to rely on available materials and expertise, resulting in a diverse array of architecture within forts as well as among them. Nonetheless, two aspects of fort design were consistent: the general layout and the expression of the military hierarchy in the architecture of the quarters.

Contrary to the usual image of a fort, stockades were rare, especially in the Great Plains, where wood was hard to obtain. Examples of perimeter vertical-log stockades include Fort Phil Kearny in present-day Wyoming and Fort Rice, North Dakota, as well as Canadian North-West Mounted Police forts of the 1870s such as Fort Macleod, Alberta, and Fort Walsh, Saskatchewan. Without a stockade, a fort could be entered at any point; access was not controlled. All forts had a parade ground, an open space in the center where troops could assemble. The primary buildings–officers' quarters, barracks, headquarters building, guardhouse–faced this parade ground, with secondary structures, including stables, workshops, laundresses' quarters, and hospital, behind it.

The only published army regulation concerning the architecture of a fort allocated the number of rooms by rank, limiting lieutenants, for instance, to one room plus a kitchen. As a result, the highest-ranking officer at a post had the largest house. Officers' quarters were domestic in appearance, with front porches, gable roofs, and picket-fenced yards. Often, lower-ranking officers occupied double quarters with separate entrances. Barracks were long, one- or two-story structures, with their broad fronts facing the parade ground. One open room served as the dormitory for an entire company; mess halls and kitchens were in separate structures, in wings off the rear, or on the first floor of two-story buildings. Designs for these buildings originated at the post, and the quartermaster general could approve or reject them.

The individuality of the forts was particularly evident in the building materials employed. The army authorized permanent forts to be built of stone or brick. Temporary forts–which was the designation of most forts in the Great Plains, despite their decadeslong utilization–could employ stone only if it were cheaper than alternatives. Troops built wood-framed buildings with board-and-batten or clapboarded walls, as at North Platte Station, Nebraska, on the Union Pacific Railroad line. Cruder, quicker wood buildings included "picket" or "stockade" buildings constructed of small-diameter vertical logs, as at Fort Richardson, Texas. Panel construction– horizontal logs let into vertical posts, which fashioned short timber into long buildings– proved to be the most expedient form of log construction, as seen at Fort Robinson, Nebraska.

Because of the scarcity of wood throughout much of the region, army officers sought alternative materials. Adobe–earth formed into bricks and dried in the sun.found extensive use at forts ranging from Fort Davis, Texas, to Fort Laramie, Wyoming, and Fort Shaw, Montana. The army also experimented with concrete construction. Officers at Sidney Barracks, Nebraska, in 1872 used a "limegrout" mixture of lime, sand, aggregate, and no cement. Soon after, officers at Fort Laramie, Wyoming, and Fort Hartsuff, Nebraska, constructed most of their new buildings of concrete.

In 1882 Commanding General William T. Sherman outlined his plans for concentrating his troops in the West into fewer, larger posts. By 1891 111 western forts had been reduced to 62. The quartermaster general's officce took an active role in rebuilding the posts, producing standardized plans by the mid-1890s. These new brick buildings–barracks as well as officers' quarters–were spacious and imposing. The standardized plans employed a Spanish Colonial appearance for forts in the southwestern Plains, including Fort Sill, Oklahoma, and an English Colonial Revival style for the rest, including Fort D. A. Russell in Wyoming. Buildings at different posts now resembled each other closely; for example, designs for buildings at Fort D. A. Russell served as models for other forts across the country, including the officers' quarters at Fort George Wright, Washington, and the commanding officer's quarters at Fort Totten, North Dakota. Use of standardized designs issued from Washington DC continued through the twentieth century, resulting in an increasingly uniform military architecture nationwide.