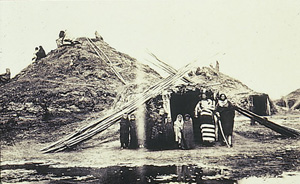 The earth lodge was the dominant dwelling of Central and Northern Great Plains village Indians. Earth lodges were circular, domeshaped dwellings with heavy timber superstructures mantled by thick layers of earth. The type emerged in the 1500s and persisted into the reservation era. Tribes most frequently associated with earth-lodge architecture include the Mandans, Hidatsas, Arikaras, Pawnees, Otoes, Kansas, Omahas, and Poncas, although several other groups also adopted the style.

The origins of the earth lodge are not entirely clear, although it was certainly a Northern Plains innovation. Between A.D. 1000 and 1400, horticultural villagers in the Central Plains built square houses. During the same time, Northern Plains villagers constructed rectangular structures. Although these types of houses are frequently called earth lodges, they were not; rather, they were vertical walled with thin coverings of wattle and daub or thatch. A few oval to circular structures appeared in northern Nebraska and central South Dakota in the 1400s, but their floor plans do not reflect the fully developed earthlodge style. The earliest true earth lodges were built in central North Dakota and northern South Dakota Missouri River villages in the early 1500s by the ancestors of the Mandans and Arikaras. The earth lodges were thicker and more insulated than the earlier square or rectangular dwellings and were a response to the cooling temperatures of the Neoboreal ("Little Ice Age") climatic regime.

The Mandans, Hidatsas, and Arikaras all constructed earth lodges in the sixteenth century. This architectural style rapidly diffused from the upper Missouri as additional sedentary tribes migrated onto the Plains from the south and east and adopted the form. To the south the Pawnees were firmly established in central Nebraska by 1600 and living in earthlodge villages. Archaeological and ethnohistorical evidence establishes that the Otoes, Omahas, and Poncas were living in earthlodge villages on the eastern margins of the Central Plains by 1700. The Cheyennes briefly adopted earth-lodge architecture in the mid- eighteenth century during their occupancy of eastern North Dakota. Some circular floorplan structures encountered by archaeologists working at seventeenth- and eighteenth-century villages of Central Plains tribes such as the Wichitas and Kansas are most likely not earth lodges but grass- or thatch-covered houses. Mississippian sites in the southeastern United States occasionally yield earth lodge-type ceremonial structures. The most fully documented are at Ocmulgee National Monument, Georgia. The relationship, if any, between these and the Plains dwellings is unclear.

Earth-lodge construction began with the excavation of a shallow circular area typically less than one foot in depth with a diameter varying between twenty and sixty feet. Heavy vertical timbers served as central roof supports. The Northern Plains earth lodges almost always had four center posts. The Pawnees, Omahas, Otoes, and other Central Plains tribes used four, six, eight, ten, and even twelve center posts. Center posts were forked at the top and connected by horizontal beams. A secondary row of posts was set around the perimeter of the floor pit several feet inside the wall. These were shorter than the center posts but also connected at the top by a series of horizontal cross-stringers. A series of closely spaced sloping posts spanned the area from the top of the stringers to the ground outside the house pit. Rafters extended in spokelike fashion from the top of the wall stringers to the horizontal beams connecting the center posts. The rafters did not extend across the full radius of the house in order to allow room for construction of a fireplace smoke hole. Thatching and then layers of thick sod and grass covered the sturdy superstructure. A sloping or vertical-walled short entry passage extended from one side of the lodge, typically the south or east.

Interior features included a central fire basin, one or more deep food storage chambers, and altars. Storage chambers were bell shaped, narrow at the lodge floor and expanding to three to five feet at their bases, and were five to eight feet deep. Such pits were later used for trash disposal. The Hidatsas called the space between the outer vertical posts and the exterior leaners an atuti. This area was used for placement of beds and storage of firewood, tools, weapons, and other personal items. Beds were either on the ground or on elevated platforms. Sleeping quarters were generally on the ledge between the outside of the house pit and the edge of the leaners. The central portion of the earth lodge was used for food preparation and social activities. The back wall opposite the entry passage often featured an altar or sacred area. One or more extended families occupied the earth lodge, which could house up to sixty people. Villages consisted of at least a dozen earth lodges and in many cases of more than a hundred. It was not uncommon for villages to be home to several thousand people. Earth lodges were often closely spaced, and during times of conflict an earth or timber fortification wall surrounded the community.

The earth lodge formed the central focus of many aspects of Plains horticultural village life. For some tribes, at least, the structures held important symbolic religious, astronomical, and social significance. In Pawnee cosmology the earth lodge was symbolically considered the heavens. Mandan and Hidatsa lodges also had sacred symbolism attached to them, and special earth lodges were reserved for ceremonial activities such as the Mandan Okipa (a four-day ceremony of renewal).

Ahler, Stanley A., Thomas D. Thiessen, and Michael K. Trimble. People of the Willows: The Prehistory and Early History of the Hidatsa Indians. Grand Forks: University of North Dakota Press, 1991.