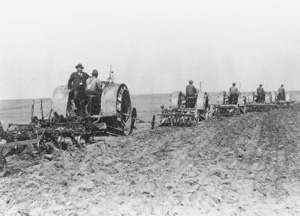 Suitcase farming was, and to a limited degree still is, carried on by farmers living more than one county away from the land they farm. The term was used as early as 1930 by the county agent for Greeley County, in western Kansas, although its characteristics were not defined. The pattern, or basic ecology, of early suitcase farming can be generalized in this way: Cheap level grazing land in a zone of recurring drought, a moderate distance west of established wheat country that was already largely mechanized, was invaded by farmers with tractors and other farm machinery in a speculative westward advance. The plow-up was so substantial that a suitcase-farming frontier can be recognized that included most of westcentral and southwestern Kansas and small areas in Colorado.

After an interruption by the drought and depression of the 1930s, and the restrictions of World War II, including gasoline rationing and scarcity of machinery and parts, a second advance of similar character carried wheat farming still farther west, mainly into eastcentral Colorado. Kiowa County was affected most. Farmers from northwestern Oklahoma, the Texas Panhandle, and urban bases in front of the Rockies, in some cases former residents, were involved, along with Kansans.

The decline in suitcase farming, due to unprofitable operation, preference for local operators, and locally to irrigation, already apparent in the 1960s, has continued, so that now suitcase farming is mainly a fleeting memory in the history of settlement and agriculture in the Central Great Plains. In aiding great plow-ups, suitcase farming doubtless contributed to Dust Bowl conditions in the 1930s and in the mid-1950s, but probably its most lasting effect was to extend the production of hard winter wheat westward several hundred miles.

Hewes, Leslie. The Suitcase Farming Frontier: A Study in the Historical Geography of the Central Great Plains. Lincoln: University of Nebraska Press, 1973.