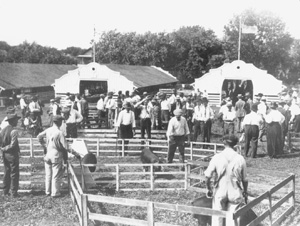 As carnivals ready rides to serve eager customers, youths finish grooming livestock for judging, and community groups tidy fundraising booths, excitement builds as communities anticipate the opening day of their annual fair. The constancy of fair activity from early settlement through today attests to their importance as economic, social, and cultural events, as well as their ability to adapt to the changing needs of Plains residents.

Early agricultural fairs were significant events in fledgling Great Plains communities. As settlement spread, town boosters competed to attract as many new immigrants to an area as possible. Started and funded mainly by merchants and stockbreeders, fairs became impressive showcases for the production capabilities of an area's fertile soil. Piles of lush apples–the bigger the better–visually guaranteed a region's potential and proclaimed that success was only a matter of hard work. Every local, state, and regional promoter tried to make their fair exhibits the most enticing, since boosters knew the economic benefits of promoting a fair "open to the world."

Though organized mainly by merchants, early agricultural societies needed farmers to enter their crops and animals for display and judging, and farmers attended fairs to socialize and see the bounty of new consumer products. Horse racing, carnivals, and sideshows provided something for everyone and increased gate receipts. When confronted with bad weather or cycles of drought and depression, which kept attendance down, fairs struggled to maintain financial stability.

Among unusual fairs on the Plains were the Indian International Fairs in Muskogee, Indian Territory (now Oklahoma), which began in 1874, and the Trans-Mississippi and International Exposition in Omaha, Nebraska, in 1898, which included an Indian Congress. The congress took on a Wild West show atmosphere with sham battles staged to increase gate receipts.

Fairs changed significantly between 1900 and 1950. During the two world wars, agricultural production was critical in both the United States and Canada, and Great Plains communities celebrated agricultural successes at their fairs. Instead of the promotional events of earlier days, fairs became more educational, highlighting agricultural production, education, and pride of place. To aid fairs financially, many states legislated tax support, and in Canada, provincial governments and towns provided assistance grants.

Despite changes in organization, emphasis, and funding, Great Plains fairs have endured. From the Texas State Fair to the Calgary Exhibition and Stampede, fairs remain community celebrations where agricultural products of the region are displayed, and where friends and neighbors socialize, gossip about town events, see the sights, encounter new experiences, and refresh some awareness of who they are and where they live.

MacEwan, Grant. Agriculture on Parade: The Story of Fairs and Exhibitions of Western Canada. Toronto: Thomas Nelson and Sons, 1950.