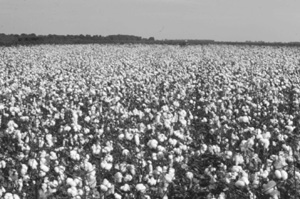 Cotton, Gossypium hirsutum L., was introduced to the High Plains of Texas near Lubbock in 1901. That year, Will Florence, who had migrated from Stonewall County, Texas, planted ten acres and harvested two bales. By 1928, 1.6 million acres of cotton were being grown in the eighteen counties surrounding Lubbock. Cotton has since become a major commodity on the High Plains of Texas, Oklahoma, and New Mexico, with minor acreage in Kansas. Approximately five million acres are planted each year in the Southern Great Plains. Because of drought, hail, or other production hazards, only about 80 percent of planted acres are harvested each year. Lint yields range from 125 pounds per acre, when grown without supplemental irrigation, to 1,000 pounds per acre when grown with irrigation. About 40 percent of the cotton grown on the Southern Great Plains is irrigated. Production hazards include abiotic factors such as drought, hail, excess rainfall, heat, cold, and blowing sand. Biotic production hazards include weed competition; insects such as aphids (Aphid gossypii Glover), bollworm (Helicoverpa zea Boddie), and boll weevil (Anthonomus grandis Boheman); seedling diseases; verticillium wilt (Verticillium dahliae); and rootknot nematode (Meloidogyne incognita).

Cotton evolved in Mexico and was introduced to the continental United States by Native Americans in present-day New Mexico, hundreds of years before Europeans arrived on the continent. The Spanish grew cotton in Florida in 1556, and cotton culture was reported in Virginia in 1621, North Carolina in 1664, Louisiana in 1697, Mississippi in 1722, Alabama in 1728, Georgia in 1734, and southeast Texas in 1821. The establishment of cotton culture on the Plains had much to do with invasion of the Mexican boll weevil into Texas in 1892. During the ensuing three decades, entrepreneurial cotton producers moved to the Southern Great Plains and the Southwest in efforts to find a region where the boll weevil could not survive. This strategy worked well for West Texas and Oklahoma until the 1990s, when the boll weevil became established on the High Plains of Texas. The producer-driven boll weevil eradication program promises to rid the United States of this devastating pest.

Cotton is planted when the soil temperature at planting depth reaches 65ºF at 10 A.M. for three consecutive days, combined with a favorable, long-range forecast. Thus, the majority of cotton on the Southern Great Plains is planted in May and early June. Given favorable temperatures, moisture, and nutrients, the cotton plant will produce its first fruit form, or flower bud–also called a square– about thirty-five days after planting, its first open flower about sixty days after planting, and its first open boll about 100 days after planting. Cotton is a botanically indeterminate plant that continues to grow vegetatively while growing reproductively. With a normal weather pattern, cotton production on the Southern Great Plains requires about 140 days from planting to maturity.

The mature cotton plant is treated with a chemical defoliant to remove the leaves, a source of trash that would lower the quality and value of the harvested product. Southern Great Plains producers then may apply a desiccant to dry the plants, thus making them more brittle in preparation for harvest. While most U.S. cotton is harvested by a spindle picker that theoretically removes only seedcotton, most of the Southern Great Plains crop is harvested with a stripper machine that removes seedcotton, burs (structures that encase the seedcotton), unopened bolls, and sometimes other plant structures such as branches or bark. This type of harvester is required because Southern Great Plains producers plant cultivars that have "storm-proof" bolls. Such cultivars have open bolls (e.g., mature bolls ready for harvest) where the seedcotton does not fluff and the dry boll structure remains relatively closed at maturity, thus preventing the seedcotton from shattering during high winds and other inclement weather.

Seedcotton, containing both lint and seeds, is taken from the farm to a gin where the seeds and lint are separated. Gin-run seeds are composed of three products: linters, hulls, and kernels. Linters are short fibers that did not elongate into spinnable fibers and the stubble of longer fibers removed in the ginning process. Linters are used in a number of products, including plastics, solid rocket propellants, rayon, paints, and photographic film. Linters are removed as a by-product of the crushing process to produce cottonseed oil. This oil is used as cooking oil and in a number of processed products such as mayonnaise and salad dressing. The remaining hulls are used as filler in feed, mulch, and poultry litter. The meal and cake remaining after oil extraction is used in fertilizer and feed. In 2000 most of the cottonseeds produced in the Southern Great Plains were used as direct feed for cattle. Cottonseeds, regardless of marketing channel, make up about 10 percent of the farm value of the crop.

The primary product of cotton production is its spinnable fibers, or lint. These fibers comprise about 33 percent of the weight of seedcotton. Lint is packaged at the gin into 480-pound bales and transported to mills that combine bales from around the world having similar and desired quality parameters for the mill's yarn product. The raw cotton is spun into 100 percent cotton yarn or combined with man-made fibers or other natural fibers to produce blended yarns. These yarns are then woven into a number of products, from diapers to designer wear.