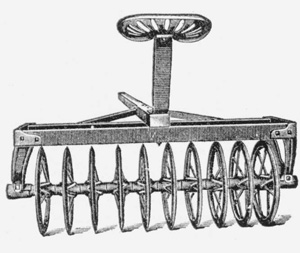 Hardy Webster Campbell was the Great Plains's greatest exponent of dry farming, which he termed "scientific soil culture." According to historian Walter P. Webb, Campbell was to tillage what William Jennings Bryan was to politics–its apostle.

Born in Montgomery Center, Vermont, on July 21, 1850, Campbell homesteaded in the James River valley, Dakota Territory, in 1879 and began observations that led to his codification of the Campbell System of farming without irrigation in semiarid regions. The principles of his system were deep plowing in the fall, subsurface packing with a packer he designed, light seeding, thorough cultivation before and after seeding, and summer fallowing, with thorough tillage (which he called "summer culture") during the fallow period. Campbell believed his system would make family farming feasible on the Plains.

Campbell publicized his methods through journals, books and pamphlets, associations, demonstrations, and lecturing. His bestknown books were the four editions of his Soil Culture Manual (first published in 1902). Journals he started include The Western Soil Culture and Campbell's Scientific Farmer. Campbell founded the Western Agricultural Improvement Society in 1895. More important was the Dry Farming Congress, founded in Denver in 1907. It originated as his personal promotional vehicle, but it grew beyond his control, with agricultural scientists getting involved and questioning his methods. He carried on most of his demonstration farming and technical lecturing for western railroads, including the Northern Pacific, Burlington, Soo Line, Elkhorn, Union Pacific, Santa Fe, and Southern Pacific. He also lectured for the Alberta Department of Agriculture in 1906–7.

Campbell lived his later years in obscurity in California and died there in 1937. His death certificate identified him only as a fireman for the Southern Pacific.