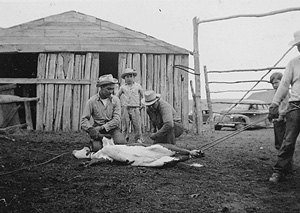 Livestock branding was introduced to the Americas in 1520 by the Spanish explorer Hernando Cortez. Branding, like ranching practices in general, spread to south Texas and the Great Plains from Mexico and the southeastern United States. At that time the southern method, which used British-derived designs of block letters and Arabic numbers, prevailed. Spanish designs became so rare in the Great Plains that the term "Mexican brand" was the only description needed to locate stray animals.

In the open-range system on the Plains, brands were burned into the cattle, usually at the spring roundup. A small September roundup was the time to brand the mavericks, cattle that had been missed in the spring. Brands were registered at the county seats in the districts where the cattle were pastured.

A number of different methods, from paint to acid branding, have been tried in applying a brand to live animals. The hot-iron brand and the freeze brand are the methods most commonly used today. The hot-iron method uses an iron heated by fire or electricity to burn the hide, leaving a permanent scar. Freeze branding creates a brand by depigmentation, whereby the pigment-producing cell in the hide of an animal is destroyed by the application of intense cold, leaving the hair to grow out white. Generally, the hot-iron branding method is the preferred form of identification on cattle. The freeze branding method is used more often to brand horses.

A livestock brand is considered a nonreplaceable form of permanent identification of ownership and a deterrent to theft. A hot iron brand is highly visible and difficult to alter; a freeze brand is also highly visible but is more easily altered. In the early days of branding livestock, a running iron, a straight piece of heated metal, was commonly used to legitimately brand livestock. However, it was also used to alter an original brand on stolen or strayed animals. The running iron was used to draw the brand on the animal, unlike the present-day preshaped branding iron, which merely stamps the brand on the animal.

State livestock agencies, livestock associations, and Canadian provinces are now responsible for recording brands in the respective state or province. Only one brand of a particular design, configuration, and location is allowed in each state or province, except in Texas, where brands are recorded county by county. A brand may be composed of capital letters, numbers, characters, and/or pictures in many different combinations and locations. The location on the animal where a brand may legally be applied is generally limited to the shoulder, rib, and hip. A properly recorded brand is considered personal property and is subject to sale, assignment, transfer, devise, and descent as personal property. Brands are a road map of an animal's history and tell a story of its owners. They are considered an animal's only return address home. Brands are usually read from left to right, top to bottom. The livestock brand "B-V" would be read and defined as a "B bar V straight away."

It is important to properly register a livestock brand and keep it in good standing, as state and province laws require brands to be renewed on a regular basis. Presently, New Mexico is the only state in the Plains that has a mandatory cattle-branding law, requiring each cattle owner to brand all cattle in his or her possession with their properly recorded livestock brand. Livestock branding continues to be vital in determining ownership, returning strays or stolen livestock to their rightful owners, and serving as a deterrent to theft.