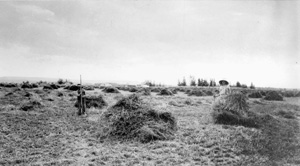 Alfalfa (Medicago sp.), a valuable forage crop, is grown widely throughout the Great Plains under both irrigated and dryland conditions. Alfalfa is a perennial with a deep-penetrating taproot, which gives it considerable resistance to drought. The plant needs a deep, welldrained soil with a pH level that is near neutral or slightly above for maximum production. When planting alfalfa into soils that have not grown the crop for many years, the seeds are commonly inoculated with an effective strain of Rhizobium bacteria for nodulation and thus nitrogen fixation.

Alfalfa is often characterized into northern, southern, or intermediate types based on their degree of winter hardiness. The less winterhardy types produce higher yields because they recover and grow more rapidly after cutting, but they will not survive the cold winters of the Northern Plains. In the Southern Great Plains, where there is a long growing season, five to seven cuttings may be taken per year, whereas in the north there may be only two or three cuttings. In the Northern Plains, where winter killing could be a problem, the last cutting occurs about four weeks before the first killing frost in order for the plants to manufacture and store sufficient carbohydrates and to develop cold resistance. With the availability of new disease-resistant cultivars, better adapted to wider climatic conditions, and with high levels of soil fertility, greater flexibility in fall cutting schedules is possible.

Alfalfa is grown primarily for hay, but it is also widely used for pasture. Additional uses include ensilage, green chop, dehydrated meal, green manure, and seed production. Alfalfa hay–if harvested to preserve its nutritive value–is a highly nutritious and palatable feed for livestock. To maintain the high nutritive value of the stems and leaves and produce high yields, fields are harvested when about one-tenth of the stems have open flowers. Alfalfa is a superior pasture legume for numerous classes of livestock because of its high quality, high yield, and wide adaptation. It is an economical source of protein and provides a greater degree of flexibility in use than most forage plants. Grazing-type alfalfa cultivars have been developed more recently. Compared to cultivars grown for hay, these cultivars have broader and deep-set crowns, more branched rooting, and do not release all regrowth buds at the same time. One disadvantage of alfalfa for pasture is that it can cause bloat in cattle and sheep; however, bloat can be minimized by certain practices, such as growing alfalfa in combination with grasses.

Alfalfa is susceptible to various diseases and insects. Resistance to many of these pests has been incorporated into the new cultivars. Most other insects and some diseases of economic importance can be controlled through the careful use of pesticides and harvest management.

Martin A. Massengale University of Nebraska-Lincoln