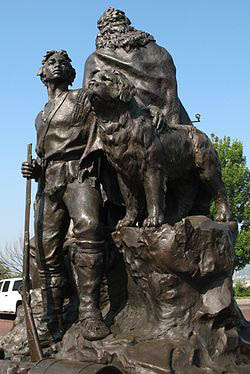 Statue depicting York during the Lewis and Clark expedition

Born into slavery in the 1770s, York achieved fame as the sole African American member of the Lewis and Clark expedition. Virginia plantation owner John Clark selected young York as his son William's body servant, a position of status and privilege, around 1784 when the Clark family moved to the Falls of the Ohio River (Louisville) where they established the Mulberry Hill plantation. William Clark inherited the Clark estate, including York, in 1799. Meanwhile, York married a slave on a nearby plantation.

From 1804 to 1806 York joined his master as a member of the Lewis and Clark expedition. Presumably, York was the first African American to travel through the Northern Plains. He enjoyed the same freedoms as the other men, which enabled him to make considerable contributions to the success of the expedition. York carried a rifle for hunting and protection, went on reconnaissance missions, and cast his vote on selecting a winter campsite near the Pacific Ocean.

When the expedition returned, York did not want to go back to the confines of slavery, nor did he want to be separated from his family in Kentucky by moving with Clark to St. Louis. Clark considered selling York, but decided to discipline him through beating, confinement, hiring him out, and lending him to his family in Kentucky. Sometime after 1815, Clark either had a change of heart or simply relented to York's demands for freedom. Clark manumitted York, providing him with six horses and a wagon to operate a freighting service between Nashville, Tennessee, and Richmond, Kentucky. York struggled to survive, a free man in the slaveholding South, before presumably dying of cholera in Tennessee sometime between 1815 and 1832. The Lewis and Clark Bicentennial Commission plans to confer enlisted man status posthumously on York.

Betts, Robert B. In Search of York: The Slave Who Went to the Pacific with Lewis and Clark. Boulder: Colorado Associated University Press, 1985.