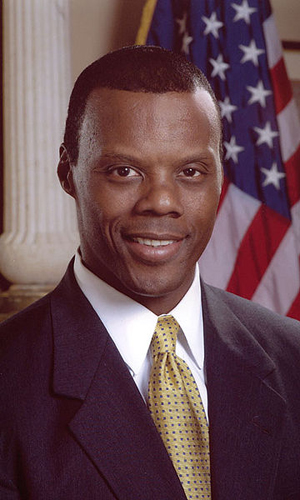 Born in a poor part of a poor town on November 18, 1957, Julius Caesar Watts made football his ticket out of Eufaula, Oklahoma. The first stop was Norman and the University of Oklahoma, where he led Sooner teams to Orange Bowl championships in 1979 and 1980. Six years in the Canadian Football League followed before he returned to Norman and became a Baptist youth minister. Previously a Democrat, Watts switched to the GOP in 1989 and won election to Oklahoma's corporation commission in 1990. In 1994 he announced his candidacy for the Fourth District's open congressional seat and won handily. J. C. Watts and Connecticut's newly elected Gary Franks thereby became the first black Republicans in the U.S. House of Representatives since 1935. Franks lost in 1996, leaving Watts the lone African American Republican in Congress.

Nationally, his star rose quickly. After a powerful address at the 1996 Republican National Convention, Watts joined Bob Dole's campaign and was the party's choice to answer President Bill Clinton's 1997 State of the Union address. Secure at home, he spent much of the 1998 campaign season speaking on behalf of Republican candidates everywhere. All of this prepared him to be a prime beneficiary of the subsequent shake-up in the Republican leadership. On November 18, 1998, Watts unseated Ohio's John Boehner by a count of 121 to 93 to become chairman of the House Republican Conference. It was his forty-first birthday. Not yet in a third term, in 2000 J. C. Watts had become the fourth-ranking leader of the House majority party. In January 2003 Watts retired from Congress and accepted positions on the board of directors of Dillard's and as national chairman of GOPAC, a national education organization for Republican state and local candidates.