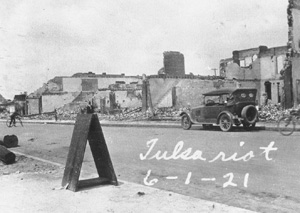 On the night of May 31, 1921, in one of the worst episodes in Oklahoma and American history, Tulsa exploded in violence that scarred the city forever. Although many details of the riot are shrouded in controversy, what is known is that about thirty-five blocks in the African American district were destroyed and at least thirty-nine people–and probably considerably more–lost their lives. The white mob torched the influential black business district known as "Deep Greenwood," and all African Americans who did not flee or get killed were arrested. It took the arrival of the National Guard and martial law to bring order to the violence-torn city.

The Jim Crow climate in Oklahoma and in much of the nation at the time set the tone for Tulsa's riot. Oklahoma had its share of lynchings and racial violence prior to 1921 and after, and the Ku Klux Klan was just gaining a foothold in the young state. Tulsa's African Americans, many of them returning World War I veterans, had a new sense of pride (as well as training), and numerous organizations, including Cyril Brigg's national group, the African Blood Brotherhood, preached self-reliance and the need for community defense. The black press in Oklahoma, and especially A. J. Smitherman's Tulsa Star, also advocated protecting family and community. Smitherman had witnessed other racial conflicts prior to Tulsa's catastrophe. In one case in Okmulgee, Oklahoma, he saw a white mob back down from a group of armed blacks who were protecting their houses. This lesson, and also the failure of Oklahoma City authorities to stop a lynching of an African American less than a year before, and the lynching of a white person who was pulled out of the Tulsa jail in 1920, increased the determination of Tulsa's black leaders not to let an African American lynching occur in their city.

On May 30, 1921, Dick Rowland, an African American shoe-shiner, went to the Drexel Building to use the restroom. The closest "colored" restroom was located on the top floor of the building. Speculation after the riot suggested that Rowland tripped as he entered the elevator and grabbed the arm of the elevator operator, Sarah Page, who then screamed. Whether this is actually what happened is not fully known. It has also been suggested they had an ongoing relationship. The next morning Tulsa police arrested Rowland for attempted rape. The Tulsa Tribune printed an article titled, "Nab Negro for Attacking Girl in Elevator," and may have included an even more incendiary article in the editorial section, but all known Tribune copies are missing this entry. These news stories aroused both sections of the town.

A large group of whites surrounded the courthouse and jail on the night of May 31. Armed African Americans twice went to the courthouse offering to help protect Rowland. Their second appearance sparked mayhem as a shot scattered the crowd. Skirmishes between blacks and whites occurred from the courthouse back to the African American neighborhoods. Whites broke into stores to get arms and ammunition, and many were sworn in as special deputies. Sporadic fighting lasted through the night. In the middle of the night Tulsa officials sent a telegram to Oklahoma City requesting help from the National Guard.

At dawn the next morning, June 1, a whistle reportedly blew signaling the white invasion of North Tulsa. One controversy surrounding the riot has been the extent to which machine guns and airplanes were used during the battle for Greenwood. Both were present, and there is evidence that explosives were dropped from planes, though the planes seemed to have been used mainly for reconnaissance. The outnumbered African Americans tried to defend their homes, but the invaders descended, burning and looting. Among the African Americans killed was A. C. Jackson, a nationally renowned black surgeon. Others fled north out of the city, but many were arrested and detained at the convention center and later at a ballpark and the fairgrounds. The National Guard arrived at 9:15 that morning, and Gen. Charles Barrett declared martial law at 11:29. By this time the riot had nearly run its course.

African Americans in Tulsa faced an uphill struggle after the riot. The city government enacted a fire-ordinance restriction to stop the rebuilding process. African American lawyers fought and won the fire-ordinance battle, but many North Tulsans were homeless through the winter and lived in tents and makeshift homes. Greenwood did rebuild and, some contend, became more prosperous than before 1921, but no insurance claims were ever paid to the holders nor did the city pay restitution. Urban renewal later leveled North Tulsa a second time.

In 1997 the Oklahoma legislature established a Race Riot Commission to study the violence of the 1921 race war. In 2001 the commission submitted an official report of its findings to the legislature and recommended reparations be paid to the survivors of Oklahoma's– and one of the nation's–worst civil disturbances.