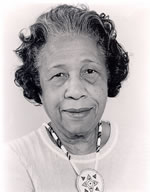 The distinguished journalist, editor, and author Era Bell Thompson was born in Des Moines, Iowa, on August 10, 1905. Her family moved to Driscoll, North Dakota, in 1917, and her "love affair" with the state began. She attended the University of North Dakota for two years and received her bachelor of arts degree from Morningside College in Sioux City, Iowa, in 1933. She later pursued graduate study at the Medill School of Journalism at Northwestern University. Following the publication of her early autobiography American Daughter (1946), which she wrote while holding a Newberry Library Fellowship, John H. Johnson hired her in 1947 as associate editor of Ebony. She served as the co–managing editor of this magazine from 1951 to 1964, at which point she became the international editor of Johnson Publishing Company, a position she maintained until her death. In 1954 her book Africa, Land of My Father appeared, and in 1963 she co-edited White on Black.

Thompson received honorary doctorate degrees from Morningside College (1965) and the University of North Dakota (1969). Her numerous awards include the Bread Loaf Writers Conference Fellowship (1949), National Press Club Citation (1961), Iota Phi Lambda Outstanding Woman of the Year (1965), the Society of Midland Authors' Patron Saints Award (1968 for American Daughter), and Theodore Roosevelt Roughrider Award, North Dakota's highest honor (1976). The Black Cultural Center at the University of North Dakota was renamed for her in 1979. Thompson died on December 30, 1986, and was buried in her family's plot in Driscoll, North Dakota.