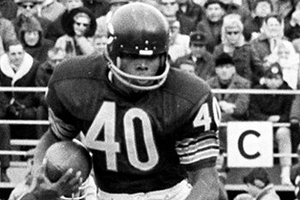 Though he played just four full seasons in the National Football League (NFL), Gale Eugene Sayers, born May 30, 1943, in Wichita, Kansas, ran his way to historical prominence with the Chicago Bears from 1965 to 1971. Sayers's talents were first realized in Omaha, Nebraska, where he was a standout in football and track at Central High School. After receiving a scholarship to play football at the University of Kansas, he earned All–American status as a halfback in 1963 and 1964. As a Jayhawk he amassed 2,675 rushing and receiving yards, averaged 6.5 yards per carry, and was named first-team All–Big Eight three years straight. In his sophomore campaign, Sayers gained 1,125 yards on 158 carries to lead the nation with a 7.1-yard average.

Sayers's success carried over into the NFL, as he lived up to high expectations of him as the Bears' first pick and the fourth overall pick of the 1965 draft. With a combination of balance, speed, and instinct, the six-foot 200-pound Sayers established himself as the premier running back of his time. While playing in just sixty-eight games, equivalent to fewer than five seasons today, Number 40 compiled 9,435 all-purpose yards, recorded fifty-six career touchdowns, and broke four NFL records and tied two more. He still shares a record with Dub Jones and Ernie Nevers for scoring six touchdowns in one game. He ran for four, caught one, and returned a punt for another record against the San Francisco Forty-niners on December 12, 1965. That same year he led the NFL with twenty-two touchdowns, a rookie record. Sayers not only stood out as a halfback, but his elusiveness on the field also led to dominance as a punt- and kickoff- return specialist. He holds the record for highest average yardage per kickoff return in a career, at 30.6 yards, and is tied with Ollie Matson for returning six kickoffs for touchdowns. He led the NFL with a 31.2-yard average in 1966, and his career best, a remarkable 37.7 yards, came a year later.

Sayers won two rushing titles in 1966 and 1969 (1,231 and 1,032 yards, respectively), rushed for 100 yards or more in twenty games, averaged five yards per carry, and was named Rookie of the Year. In five professional bowlgame appearances, he was named Most Valuable Player three times. Two severe knee injuries cut his career short, and he was forced to retire in 1971. At thirty-four years old, he became the youngest inductee into the NFL Hall of Fame in 1977. Since his retirement from football, Sayers has become a successful businessman as head of Crest Computer Supplies, a Skokie, Illinois–based company.