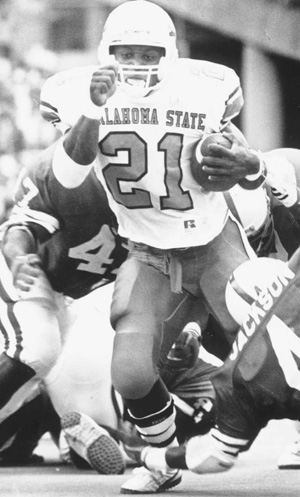 Barry Sanders, who was born in Wichita, Kansas, on July 16, 1968, is considered one of the greatest running backs to ever play football. Following a noteworthy high school career, Sanders was not widely recruited by the major colleges because of his relatively diminutive stature (five feet eight inches). However, Oklahoma State University took a chance on the small but determined Sanders. After two years as one of the best kick-return specialists in college football, in 1988 Sanders had the most prolific season running the football in college football history. That year Sanders ran for 2,628 yards, a National Collegiate Athletic Association record, and scored thirty-nine touchdowns, winning the Heisman Trophy as the nation's best player. Sanders was taken as the third choice in the 1989 National Football League (NFL) draft by the Detroit Lions, for whom he played ten seasons. During his nfl career Sanders rushed for 15,269 yards and was the nfl Rookie of the Year in 1989 and the Player of the Year in 1997.

Sanders's legacy as a running back is as one of the most elusive runners in the game, and his misdirection-runs at both the college and professional levels continue to be seen on "highlight reels" when great running backs are discussed. Following the 1998 season Barry Sanders surprised the football world by retiring from the nfl needing less than 1,500 yards to become the most prolific runner in NFL history. Sanders continues to reside in the Detroit area, although he remains active in the Wichita area through his generous support of his home church.