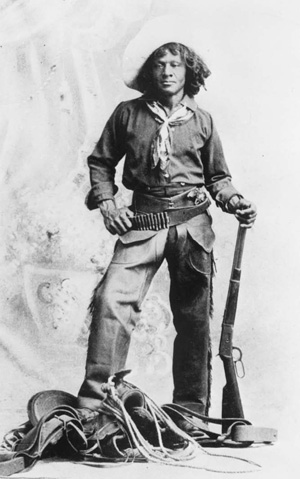 Also known by his nickname Deadwood Dick, Nat Love was born a slave in 1854 in Davidson County, Tennessee. At the age of fifteen he ventured to the Great Plains where, like many ex-slaves, he found work in the cattle industry. For twenty years he worked on cattle ranches in the Texas Panhandle and Arizona. Love participated in the great cattle drives of the 1870s, driving herds to Dodge City, Kansas, and to mining camps in Montana and the Black Hills. While in Deadwood, Dakota Territory, in July 1876, he reportedly earned the nickname Deadwood Dick after winning a riding, roping, and shooting competition. Love retired from the cattle industry in 1890 and went to work as a porter for the Denver and Rio Grande Railroad. His last job was as a bank guard in Los Angeles.

Love is best known for his autobiography, The Life and Adventures of Nat Love, Better Known in the Cattle Country as Deadwood Dick (1907). Unfortunately, the book is highly exaggerated, and it is difficult to separate truth from fiction. Inspired by the Western dime novels of the period, Love describes himself as the best cowboy, best shooter, and hardest drinker on the western frontier. The real life of Nat Love, therefore, is difficult to trace. Nonetheless, the book is high adventure and includes colorful western personalities such as Billy the Kid, Jesse James, and Buffalo Bill Cody. Love reportedly married a woman named Alice in 1889 and had one child. He died in 1921 in Los Angeles, California.