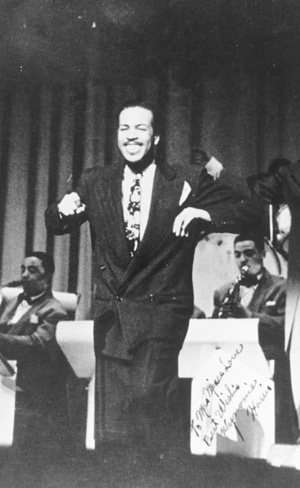 Wynonie Harris on stage with the Lucky Millinder

Blues singer Wynonie Harris was a leading figure in black music during the 1940s and early 1950s, and he developed a style that had a considerable influence on early rock and roll. A handsome man with striking blue-gray eyes and a flashing smile, and with a voice powerful enough to project over driving horn-led bands, Harris was renowned as a charismatic performer on stage and as a hard-drinking hell-raiser and ladies' man off stage. He became best known for his humorous, often risque songs such as "Good Rockin" Tonight," "All She Wants to Do Is Rock," "Grandma Plays the Numbers," and "Bloodshot Eyes."

Harris was born in Omaha, Nebraska, on August 24, 1913, the illegitimate offspring of an African American mother and a Native American father. He worked as a dancer for several years before becoming a singer. Influenced and inspired by Jimmy Rushing and Big Joe Turner, both big-voiced blues singers from Kansas City, Harris learned his craft in the clubs on Omaha's Near North Side, in particular Jim Bell's Harlem Club. By the early 1940s he was calling himself "Mr. Blues" and was a regular attraction at the Club Alabam on Los Angeles's Central Avenue. His big break came in 1944 when he was invited to join Lucky Millinder's big band as the featured male singer. With Millinder he recorded "Who Threw the Whiskey in the Well," which became a number-one hit on the black music charts. Thereafter, Harris worked as a single, playing residencies at the country's leading black nightclubs and touring frequently. His greatest commercial success came after he signed with King Records in 1947 and recorded "Good Rockin' Tonight." From then until 1952 a string of hit records made him one of the biggest-selling artists among African American record buyers.

Harris's brand of good-time blues was a direct precursor of 1950s rock and roll. Elvis Presley, who recorded his own version of "Good Rockin' Tonight" in 1954, is reputed to have adopted some of his stage movements after seeing Harris perform. Wynonie Harris himself, however, was too old, too raunchy, and too rooted in black musical traditions to appeal to rock and roll's white teenage audience. Harris never gave up the music business completely, but from the mid-1950s onward he worked mostly outside music. He died of throat cancer in Los Angeles on June 14, 1969.