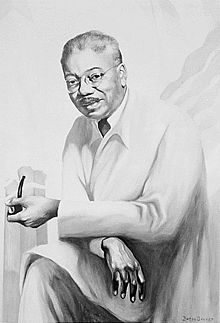 Self-portrait of the artist Aaron Douglas

Aaron Douglas was the leading visual artist of the Harlem Renaissance. Born on May 26, 1899, Douglas attended high school in his hometown of Topeka, Kansas, and received his art training at the University of Nebraska, graduating with a bachelor of fine arts degree in 1922. Douglas had arrived at Nebraska without his high school records, ten days into the term. Still, he was warmly welcomed, and he considered his years at Nebraska one of the more positive times in his life. Douglas worked as an art teacher at Lincoln High School from 1923 to 1925, then moved to Harlem.

Within weeks of his arrival in Harlem, Douglas was recruited by the NAACP's W. E. B. Du Bois, editor of The Crisis, and Charles S. Johnson, director of the Urban League and editor of Opportunity, to contribute illustrations to their journals. Douglas quickly became one of the leading artists in the New Negro movement, or Harlem Renaissance. Within this largely literary movement, Douglas was specifically hired to create a visual message for a public that had grown dramatically as black migration to the North increased during World War I. The Crisis had a national readership, and any illustration Douglas made would be seen in libraries, schools, and homes across the country. Douglas tried to reach this new black middle-class public–a public that was difficult to define and locate–by creating a new, positive, African-influenced black image for his audience.

He wanted to change the way blacks were depicted in art, and to bring the language of African art first to Harlem and then to the whole country. Douglas's growth and experimentation can be traced in his magazine illustrations, which were some of his most forceful and interesting works. Through them he evolved his artistic language, a distinctive language immersed in African art. His illustrations, blending art deco, cubism, and West African sculpture, are clean and bold, often showing a few simple figures or illustrating a basic idea. In his first year in Harlem he won three prizes for his work.

Douglas's Harlem years were filled with commissions for illustrating books and painting murals, most notably his 1934 Aspects of Negro Life, which was commissioned by the Public Works Administration for the Countee Cullen Branch of the New York Public Library. Douglas left Harlem in 1937, and in 1939 became the founding member of the Art Department at Fisk University. He chaired that department for almost three decades. Douglas died in Nashville on February 2, 1979.