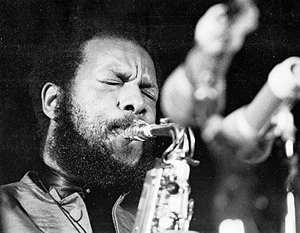 Avant-garde saxophonist-composer Ornette Coleman, born in Fort Worth, Texas, on March 19, 1930, came to the attention of the jazz world in a 1959 groundbreaking engagement at the Five Spot Club in New York City. Although reflecting the southwest rhythm-and- blues tradition of his native Texas, Coleman's radical improvisational approach allowed him to shift his music's flow and density at will by dispensing with fixed harmonic patterns and structural forms. This approach was later formulated in his "harmolodic theory." Coleman's tumultuous improvisations, despite their irregular shapes and jagged lines, often possessed a haunting lyrical beauty as well as emotional directness.

The saxophonist's unorthodox approach, emphasizing collective rather than solo improvisation, divided the jazz world. Detractors, including jazz giants Miles Davis and Charles Mingus, described his music as cacophony and called him a poseur. Boosters, including Leonard Bernstein and Gunther Schuller, hailed him as a genius. His influential 1959–60 group (with trumpeter Don Cherry, bassist Charlie Haden, and drummer Billy Higgins) was documented in two landmark 1959 albums, The Shape of Jazz to Come and Change of the Century. The aptly titled Free Jazz (1960), a thirty-seven-minute collective improvisation for double jazz quartet, was equally influential. In addition to alto saxophone, his primary instrument, Coleman has performed on violin and trumpet. Among his best-known compositions are "Lonely Woman," "Ramblin," and "Blues Connotation."

Although his influence has ebbed, especially with the revival after 1980 of older jazz styles, Coleman has successfully employed his "harmolodic" approach in the electric-funk group, Prime Time. Still, Coleman's reputation rests on his status as a key innovator of 1960s' "free jazz" with its freewheeling ensemble improvisations, open-ended plastic forms, and "dissonant" tonal clashes. Among Coleman's many honors is a MacArthur Foundation Fellowship.