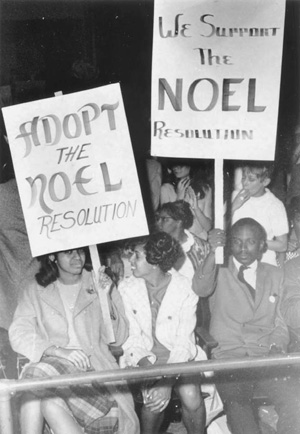 African Americans in the Great Plains were subjected to some of the same racial discrimination they faced in the South. They have often been denied equal opportunities, experienced violence, and been victimized by racial profiling. The Great Plains has also been the setting for important legal cases and protest movements of the civil rights movement.

Racial unrest and violence against African Americans were widespread in the United States during the early twentieth century. From individual lynchings to mob violence against entire communities, whites lashed out against African Americans. Between 1917 and 1923 the United States experienced a series of deadly race riots. From Tulsa, Oklahoma, to Omaha, Nebraska, and many communities in between, African Americans were attacked, beaten, and killed by mobs. Tulsa was the site of one of the deadliest race riots in American history. On May 31 and June 1, 1921, white mobs attacked Tulsa's black community, destroying thirty-five city blocks and killing indiscriminately. Official counts list only thirtynine deaths, but historians' and witnesses' accounts push the potential number of deaths up to 300. During the 1990s steps were taken to rectify the wrongs perpetrated against Tulsa's African American population. Seventyfive years after the fact, and six decades after his death, J. B. Stradford, a black Tulsa businessman, was cleared of charges connected to the riot. Descendants of Stradford traveled from around the country to witness a ceremony in October 1996 in which authorities absolved him of charges that he had incited the riot. The Race Riot Commission was established in 1997 to investigate the riot and pay restitution to survivors. In 2001 a report was submitted to the Oklahoma legislature recommending the direct payment of reparations to the survivors.

An important step in the battle for civil rights was the 1954 Supreme Court decision in Brown v. The Board of Education of Topeka. This case was one of five segregation lawsuits selected by the NAACP in 1950 to challenge the "separate but equal" rule in the federal courts. On May 17, 1954, Chief Justice Earl Warren read the Court's decision, which was that "separate but equal" did not belong in public education. Although this landmark legal triumph did not instantly end school segregation, it destroyed the constitutional foundation upon which legalized segregation rested and made future gains possible.

In the late 1950s, however, many Great Plains communities still denied African Americans access to the same schools, churches, restaurants, and other public accommodations used by whites. Within this setting, young African Americans in Wichita, Kansas, and Oklahoma City, Oklahoma, launched what may have been the first sit-ins of the civil rights movement. Beginning on July 12, 1958, several Wichita youths, under the direction of the local NAACP Youth Council, began a sit-in at the Dockum Drug Store in order to end the city's segregation policy. The Wichita sit-in ended on August 7 when the store announced that all customers would be served without regard to race. Spurred on by the victory in Wichita, eight Oklahoma City youths entered the Katz Drug Store on August 19 and requested service. After just two days the store desegregated its lunch counter. Great Plains sit-ins undoubtedly influenced the larger sitin movement that swept through the South in 1960.

During the 1960s black student unions emerged on college campuses to challenge racial inequalities in the educational system. The black student union at the University of Kansas, for example, demanded, among other things, the establishment of a black studies department, institutional commitment to the recruitment and retention of black students, the hiring of African American faculty and administrators, and the formation of an allblack pompon squad in protest of the university's all-white squad. In response, the University of Kansas opened the Office of Minority Affairs in 1969 and one year later created the Department of African and African American Studies. Black student unions also appeared on high school campuses. The activism of Lawrence (Kansas) High School's black student union led to the introduction of black history courses and a black American heritage week, black representation on cheerleading squads, and the formation of the Lawrence Branch of Concerned Black Parents, Inc.

By the 1990s many people opposed a.rmative action policies. In 1996 the United States Supreme Court let stand a state court ruling in Hopwood v. University of Texas that led to the end of affirmative action in Texas public colleges and universities. The number of African Americans at the University of Texas law school dropped sharply. The Supreme Court's ruling also had a national impact. It triggered California's Proposition 209 in 1997, outlawing the use of gender and race in hiring, contracting, and university admissions.

A more recent civil rights issue is the racial profiling of African Americans. An example of this in the Great Plains occurred in August 1998 when Rossano V. Gerald and his young son Gregory crossed the Oklahoma border into a nightmare. A career soldier and a highly decorated veteran, Gerald, a black man of Panamanian descent, was stopped twice in thirty minutes by the highway patrol. During the second stop, which lasted two-and-a-half hours, troopers terrorized Gerald's twelve-year- old son with a police dog. Troopers placed both father and son in a closed car with the air conditioning off and fans blowing hot air, warning that the dog would attack if they attempted to escape. Halfway through the episode, perhaps realizing the extent of their lawlessness, the troopers turned off the patrol car's video evidence camera.

Another example of racial profiling took place at Oak Park Mall in Overland Park, Kansas. The mall security officer in Dillard's department store harassed two black women and accused them of shoplifting. It turned out that the two women were innocent and the security guard was profiling African Americans under the instructions given to him by Dillard's management. The two women filed a discrimination lawsuit and were awarded $1 million by the jury in December 1997.

The battle for civil rights in the Great Plains has had its own particular history, but it is not fundamentally different from the national trend. The perception that only the South was racist is a myth of the American past. In fact, the struggle for civil rights is an American journey, involving all American regions.

See also LAW: Brown v. The Board of Education of Topeka .

Jacob U. Gordon University of Kansas