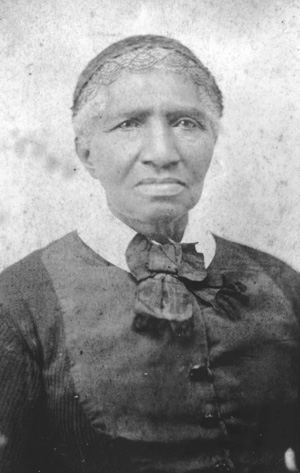 "Aunt" Clara Brown was born in Tennessee in 1803 to slave parents, who were sold to separate owners when she was only three. She went with her mother to the home of Ambrose Smith, a farmer in Logan County, Kentucky. Smith, a kindly man and a devout Methodist, took Clara and her mother to his church services.

Clara was eighteen and a tall, strong woman with warm brown eyes when the Smiths bought an eighteen-year-old carpenter slave, Richard. When he and Clara fell in love, they were encouraged to marry and produce children to work the Smiths' farm. They were separated when Clara was sold to George Brown. Following southern custom, she, like other mature female slaves, was called "Aunt" and given the last name of her new owner. The Browns liked Clara's intelligence and spunk and helped her buy her freedom. She moved to St. Louis, where Missouri law protected free blacks. She later went with the Browns when they emigrated to Kansas. There she joined a wagon train headed to Colorado, earning her way as a cook. She arrived at Denver in June of 1859.

Denver's first-recorded black woman, Aunt Clara opened a shop as a laundress, worked hard, and scraped together $5,000 to go back to Logan County, Kentucky, to look for her husband, children, and friends. She returned to Colorado with one daughter and other relatives and friends newly freed from bondage.

Aunt Clara moved to Central City and resumed her laundering work, toiling long hours and denying herself any luxuries. With the money she saved she funded the construction of St. James Methodist Church, which thrives to this day. She died in her sleep on October 23, 1885. At her burial at Denver's Riverside Cemetery, Colorado governor James B. Grant, Denver mayor John L. Routt, and other dignitaries praised Aunt Clara as "the kind old friend whose heart always responded to the cry of distress, and who, rising from the humble position of slave to the angelic type of noble woman, won our sympathy and commanded our respect."