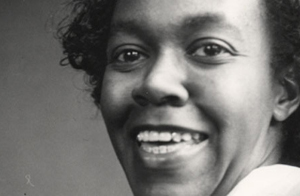 Gwendolyn Brooks was born in Topeka, Kansas, on June 7, 1917, to native-born Kansans Keziah Corine Wims and David Anderson Brooks. Her mother was born in Topeka, Kansas, attended Topeka High School and Emporia Normal, and later became the fifthgrade teacher of Monroe School in Topeka. Her father was born in Atchison, Kansas, but his family moved to Oklahoma when he was nine, and he remained there until he completed high school. He then attended Fisk University in Nashville, Tennessee, where he planned to pursue a medical career, but he left the university at the end of his first year. David and Keziah met during the summer of 1914 and married in July 1916. Gwendolyn, one of their two children, was born June 7, 1917, in Topeka, Kansas. The family relocated to Chicago when Gwendolyn was five weeks of age, and she lived there for the remainder of her life, developing a fierce identity as a Chicagoan.

Gwendolyn's parents recognized her early talents in creative expression and nurtured her desire to write. Her mother regularly relieved her of household chores and taught her the art of oral recitation during Gwendolyn's preschool years. Likewise, her father, who revered books and education, provided her with a writing desk and bookcases to house her growing collection of literary works. Brooks began rhyming around the age of seven and compiling poetry notebooks by eleven. Brooks's first poem, "Eventide," was published in American Childhood magazine in 1930. By 1934 Brooks had become a regular contributor to the Chicago Defender newspaper and, in a twoyear period, published more than seventy-five poems in the weekly poetry column "Lights and Shadows."

Brooks attended public schools in Chicago and graduated from Forrestville Elementary School, Englewood High School (1934), and Wilson Junior College (1936). In 1938, when they were both twenty-one years old, Gwendolyn Brooks married Henry Lowington Blakely II, and together they had two children, Henry III and Nora. Their first home was a kitchenette apartment, located at 43rd and South Park on Chicago's South Side. In 1941 Brooks had her first formal poetry lessons when Inez Stark Cunningham, a Chicago socialite and editor of Poetry: A Magazine of Verse, volunteered to teach a poetry class at Chicago's South Side Community Art Center. Out of this a.liation, Brooks broadened her poetic traditions and techniques and, in 1943, won the Midwestern Writers Conference Poetry Award.

During her life, Gwendolyn Brooks published more than twenty books, including poetry, prose, fiction, and autobiography. Her first poetry collection was A Street in Bronzeville (1945); her second one, Annie Allen (1949), won her the Pulitzer Prize in May 1950. She was the first black writer to win the prize. She published one novel, Maud Martha (1953), a children's poetry collection, Bronzeville Boys and Girls (1956), and a third volume of poetry, The Bean Eaters (1960). Brooks remains highly acclaimed for her adroitness in merging character vignettes developed from the society that surrounded her and intertwining those stories with the complex structures of European poetic forms like the sonnet, folk and literary ballads, terza rima, and rhyme royal. Additionally, she honed the rhythmic flow of form using rhetorical strategies like anaphora, alliteration, and polyptoton. In much of her poetry after In the Mecca (1968), Brooks was not as form-conscious, often employing free verse to tell a succinct story but still manipulating story and structure with the flourish of repetition, as in anadiplosis and epistrophe, in place of her former strict metrical lines.

Brooks was highly acclaimed for her poetry and was the poet laureate of Illinois from 1968 to 2000. She held the post of distinguished professor of English at Chicago State University from 1989 to 2000. In 1985 she became the 29th Consultant in Poetry to the Library of Congress. She was a member of the American Academy and Institute of Arts and Letters; the recipient of the National Endowment for the Arts Lifetime Achievement Award in 1989; the only American to receive the Society for Literature Award, University of Greece, 1990; the National Endowment for the Humanities' Jefferson Lecturer, 1994; and a National Book Awards Medalist for Distinguished Contribution to American Letters, 1994. In 1995 she received the National Medal of Arts at the White House; in 1998 she was inducted into the International Literary Hall of Fame for Writers of African Descent; and in 1999 she was inducted as the sixty-fifth poet into the Academy of American Poets. She died in her Chicago home on December 3, 2000.