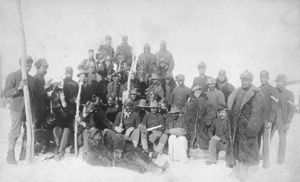 In recent years, military and African American historians have discovered a common interest in the black regiments that served in the American West. The term "buffalo soldier, a phrase originally employed by the Plains Indians to denote a black cavalryman, colloquially has come to describe all African Americans who served in the frontier army during the late nineteenth century. Impressed with the record of black troops in the Civil War, Congress in 1866 created six new regular army regiments, two cavalry and four infantry, that consisted entirely of African American men. After an 1869 consolidation, four black regiments, the Twenty-fourth and Twenty-fifth Infantries and the Ninth and Tenth Cavalries, comprised nearly 10 percent of the western army. Serving in racially segregated regiments, always under the command of white officers, black soldiers laid telegraph lines, protected railroad crews, escorted military prisoners, and performed numerous other tasks that made settlement of the Plains possible.

Immediately following their arrival, black soldiers experienced trouble with white civilians. At Fort Hays, Kansas, for example, an ongoing feud with local townspeople culminated in the lynching of three black infantrymen in January 1869. Discrimination and violence plagued their service at places like Forts Larned and Leavenworth in Kansas and Fort Concho in Texas. Empowered by their roles as U.S. soldiers, African American servicemen often defied western communities' racial mores by patronizing saloons, brothels, and other "white" establishments, resulting in armed conflict. The military's relationship with civilian settlements generally had never been peaceful, and the presence of armed blacks only intensified the friction. As a result, commanders took special pains to station black companies in areas remote from white populations. The Twenty-fourth Infantry, for example, spent more than a decade stationed in West Texas and on the Mexican border, fighting Indian raiders and recalcitrant outlaw gangs. Indian Territory became another assignment for black regiments. There, troops enforced government policy on reservations and prevented encroachment from white ranchers and farmers. Despite concentrations in these areas, however, companies of buffalo soldiers were stationed throughout the Plains until the late 1880s. As agents of federal expansion, African American recruits, many of whom had only recently left slavery, were often responsible for dispossessing Native Americans and relocating them to reservations. Evident contradictions in this situation did not seem to deter them from performing official duties.

Black troops did display considerable loyalty toward each other. Their desertion rates consistently were far below those of white troops, and their high reenlistments allowed them to benefit from the presence of many seasoned veterans in their regiments. For all the danger, prejudice, and sheer boredom that characterized their service, black soldiers developed strong bonds based on uniform and race, which made the frontier army one of the more attractive options available to African American males in the late nineteenth century.

Leckie, William H. The Buffalo Soldiers: A Narrative of the Negro Cavalry in the West. Norman: University of Oklahoma Press, 1967.