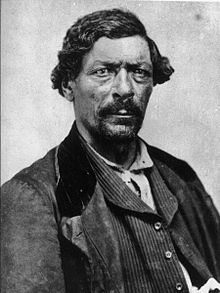 Born a slave to his mulatto mother, Miss Kill, and plantation owner Sir Jennings Beckwith on April 26, 1798, in Fredericksburg, Virginia, James Pierson Beckwourth became a famous African American mountain man. In 1810 the Beckwiths moved to St. Louis, where Beckwourth received his freedom. He joined Gen. William H. Ashley's fur-trapping expedition to the Rocky Mountains in 1824, working as a horse buyer, blacksmith, and trapper. Beckwourth fought against the Blackfeet in 1827–28, before being adopted into Crow chief Big Bowl's band. He married several Crow women while working as a trader for Kenneth McKenzie and the American Fur Company in the 1830s.

Beckwourth served under the command of Gen. Zachary Taylor in the Second Seminole War in Florida in 1836–37, worked as a trader for Andrew Sublette and Louis Vasquez along the Santa Fe Trail at Bent's Fort and Taos, and married a Spanish woman. In 1842 he built a trading post on the Arkansas River and founded the settlement of Pueblo, Colorado. He raided horses from Mexican ranchos, participated in the California insurrection in 1845–46, joined the gold rush in 1848, and opened a trail, later known as Beckwourth Pass, through the Sierras.

His 1854 account of his life earned him a reputation as a liar because he exaggerated his role in many events. He later supplied miners in the Pikes Peak gold rush and guided the army in the Sand Creek Massacre. After serving as scout at Fort Laramie, Beckwourth returned to live among the Crows, where he died in 1866.

Beckwourth, James P. The Life and Adventures of James P. Beckwourth, Mountaineer, Scout, and Pioneer, and Chief of the Crow Nation of Indians, as Told to Thomas D. Bonner, edited by Delmont R. Oswald. Lincoln: University of Nebraska Press, 1972.