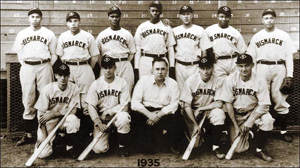 Interracial baseball was prevalent in the Great Plains at the same time that other social interaction between African Americans and whites was virtually nonexistent. While Jim Crow segregation prevented African Americans from fully enjoying their constitutional liberties, black baseball players routinely experienced equality on the baseball fields of the Great Plains. It was common for all-black teams such as the San Angelo Sheepherders or Kansas City Colts to play against all-white teams such as the Duncan (Oklahoma) Cementers or the Arkansas City (Kansas) Dubbs.

Beginning around 1920, and increasingly thereafter, residents of the Great Plains could watch baseball contests between local all-black teams as well as barnstorming (touring) black teams that challenged local white teams. The all-black Wichita Monrovians, who played in the professional Colored Western League (founded in 1922) along with all-black teams from Oklahoma City, Omaha, Coffeyville, Topeka, Independence, and Kansas City (Kansas), often played white teams throughout the Plains because additional games provided players the opportunity to earn extra money. Barnstorming tours were also common and included many professional black teams, including the Cuban All Stars and the Kansas City Monarchs–the top team in the Negro National League in the 1920s and 1930s. Despite the segregation that isolated white and black Americans in everyday life, the baseball diamond proved to be a place where diverse people could compete on an equal basis.

The extent of racial toleration on the baseball field is evident from the game that took place in 1925 between the all-black Wichita Monrovians and the all-white Wichita Ku Klux Klan Number 6 team. The game was played without violence, and the Monrovians prevailed ten to eight. Another sign of racial toleration on the baseball fields of the Great Plains was the existence of an entire racially integrated league in North Dakota in the early 1930s. The league included many players from the Negro National League, including Hall of Famer Satchel Paige, who played for the integrated Bismarcks and was paid $400 a month and given a car by the team owner.

The expansion of integrated regional baseball continued in 1934 when the organizers of the Denver Post's semiprofessional baseball tournament invited the Kansas City Monarchs to be the first all-black team in the tournament's nineteen-year history. The Monarchs finished second and set the stage for future black teams to participate in Plains baseball tournaments. In 1935 the magnitude of racial toleration in baseball in the Plains was displayed in Wichita at the first National Semi- Pro Baseball Tournament. Four different racial groups competed among the thirty-two teams in the tournament. The Memphis Red Sox, San Angelo Sheepherders, Denver Stars, Texas Centennials, and Monroe Monarchs were all-black teams. The Nipponese Stars from California were Japanese and the Stanolind Indians from Oklahoma were Native American. The most diverse team was the tournament champion, the Bismarcks, who featured five white players and six black players, including Satchel Paige, who pitched in the decisive championship game.

Despite the presence of interracial baseball, the Great Plains was not a haven of racial tolerance in the Jim Crow era. Racial toleration in baseball in the Great Plains existed because African Americans represented only a tiny fragment of the total population and were consequently not considered a threat to the existing social order. Interracial and integrated baseball flourished there because the presence of black and white players together did not challenge the racist segregation that existed outside the lines of the ballfield.